Beware of the medical powers of Dominican women

Apologies for taking such a long time to blog. Usual excuse - busy with writing second book, deadline is the end of April so I need to get on with it.

Not an awful lot of news from the mountain. Danilo has nearly qualified as a lawyer, and is allowed to practise certain types of law now. For this he had to buy his toga as they call it, and his birette. I call it a cloak and a hat with a pom pom.

The toga is historically associated with professionals and upper class people, going back to Roman days, but now, in the Dominican Republic it is used by judges, prosecutors and lawyers. It has to be worn with a white shirt and black tie, and a black suit, although they can get away with a neutral or dark colour suit.

The pom pom hat is black and hexagonal, and judges have a purple pom pom, prosecutors a blue one and lawyers a white one. He is not smiling in the photo as lawyers are supposed to be serious! 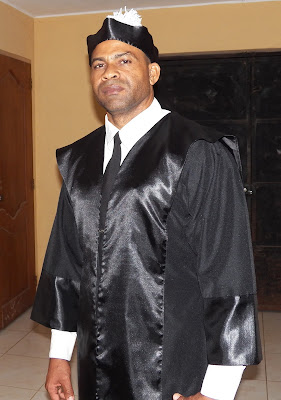 In the meantime, I have been sick again which is most unlike me. This time it started with vomiting in the middle of the night - non stop. Danilo was concerned and called a neighbour, Angela and she came round even though it was 3 am. She immediately took charge, took my pyjamas off and plonked me naked on the toilet. She then proceeded to pour jugs of cold water over me, starting on my head, dried me off, put me back to bed and mopped up the flooded bathroom. It worked in that I stopped being sick - only to start again in the morning.

The next day she came around with the well known cure for everything, chicken soup, and ginger tea. As I was try to force some soup down, she pointed out that she had a gift for curing people, and when neighbours, Sukin and Leida had had sugar attacks (diabetics) she had done the same and cured them. I pointed out somewhat dryly that they were both dead now, around 3 months after her magical cure, so I was not convinced of her curative powers.

Albert and Chivirico playing loads of baseball at the moment, and they are both apparently good, according to El Manager. Here they are today, just back from a game. The difference in height is amazing, considering there is only 8 months difference in age - I call them Mop and Bucket. 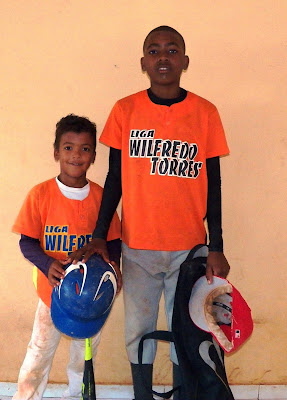