Trip to the river and animal update

Apologies for the delay in posting. I blame the weather. It has been appallingly hot which stifles my creativity and even worse we had no water for 8 weeks.

The water is usually delivered every second Thursday by pipeline into the cistern from where we pump it into the house on demand. Recently the odd Thursday has been missed which has meant we had to buy it from a water truck. This is a little old man and an even older truck with a tank on the back and he fills his tank with water from wherever he can find it and delivers it to us at a cost of RD$600 which is around US$12. But then the water stopped coming completely - the water people said a pump was broken but word on the street was that battery chicken farmers paid to get extra water so they diverted our water to them.

It would be a pain to have to buy water, but at least it was an option - until it wasn't when old water man's pump to pump water into his truck broke and he wasn't delivering water. After 6 weeks he fixed his truck and we were on the long list for water delivery. After 7 weeks he delivered a truck load to us and the following week the street water arrived again. Let's see if we get it again this week.

Meanwhile no rain and the high temperatures continue. Said water man mentioned to Danilo that one of the places he went to get water was just outside Moncion, the mountain town 11 kilometres from us,  and was called La Meseta. He said it was no distance at all, so Danilo said we should go so that I could have a relaxing day. Ha! Chivirco was with us for the weekend and we haven't seen him much as he had his tonsils and adenoids out during the school holidays, and he loved the idea of the trip.  So, as the only car we now have is my faithful old jeep, we checked water and oil, and prepared to leave. The jeep wouldn't start so Danilo hit the battery terminals with a rock and hey presto it started.

We put some petrol in at the local gas station which is a colmado with beer bottles full of gasoline so we put in a couple of Presidente bottles to get us to Moncion where we put two gallons in and then set off for La Meseta. I knew where it was as I had looked at the map but Danilo had to ask every person he saw to check we were on the right road. The road was appalling - a single carriageway dirt track with big rocks, and every time we had to stop, which was a lot, the jeep stalled and would not start. We have no aircon so the car was full of hot air and dust and I was trying to drive with one foot on the brake and the accelerator so it would not stall. Each time it stalled it was, out of car, lift bonnet up, hit battery with rock, go again. Also when it stalls, the steering doesn't work so we blocked the way for several cars as we were stuck in the middle of the road. Then I couldn't change gear and we discovered we had no clutch fluid, so that was yet another struggle to try and get the car in gear. On the way there we passed water man, who I could happily have strangled by then. Every person we asked how much further they said "alli mismo" which means just there. They all lied.

Eventually we reached the river after 2.5 hours, so much for being very close. Yes it was very pretty. 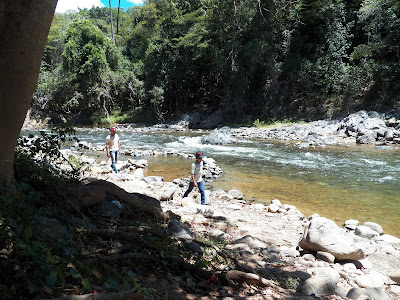 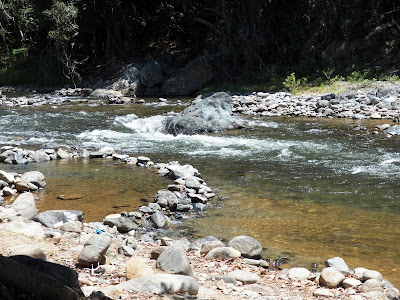 Chivirico and Danilo stripped down to their underpants and went for a swim, and loved it as the water was freezing cold and the river had a sandy bottom. I don't tend to join in these river dips as they just put their clothes on top of their soggy knickers for the drive home, and I don't do soggy knickers. 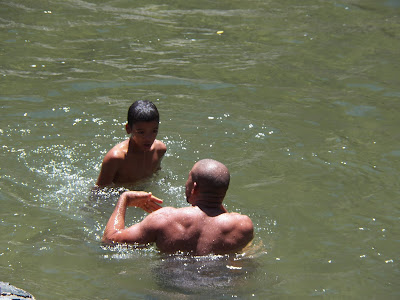 We were not sure if the jeep would make the trip home so we didn't stay long, and we were hungry. It seemed to take less time coming back but that didn't stop the jeep conking out again several times. I was never so pleased to be back - I could see us breaking down in the middle of nowhere.

The other news is that 6 weeks ago today, Canguru, who for some reason is now called the Barracuda, gave birth to five puppies, one tailless female and four males. All doing well.


The other news is that Danilo decided that the nasty horrid geese were now manso which means docile. And given that the word for goose is ganso we supposedly have gansos mansos. They had been waking us up every morning as their pen is under our bedroom window and these geese make an appalling noise. So, unbeknown to me he let them out in the back garden. They seem pretty calm and he can go out into the back with no problem. They don't like me though which means I rarely venture into the back garden and when Zelda does her flying off the balcony stunt they head for her too. They also escape often at around 5 am and wander around the campo - although I don't think have attacked anyone yet - I wouldn't trust them an inch.

Two of our goats sadly died, Maggi and Picante - no idea why, and Harry, one of the twins did his duty and we have two pregnant goats, Oregano and Chilli Pepper. Both have a couple of months to go.

Oh, and finally, which I nearly forgot, Danilo has finished his law degree and the graduation ceremony is at the end of September, so that is something to look forward to. Once he starts work I will start on book number 3! Promise the next episode of the blog will not be as long coming. We also have Christmas to look forward to and this year, for the first time in 12 years, I am planning to go to England and assuming he gets a visa I will be taking Chivirico with me, which will be great fun. Danilo will stay home to look after the animals.
Posted by Lindsay at 5:01 PM 1 comment: