It has been another animal dominated couple of weeks while we still wait for the party to decide who the mayoral candidate will be. There are over 1500 pre-candidates awaiting to hear their fates supposedly based on opinion polls although the names of the companies doing the poll are not being released. Will it all be done fairly? Your guess is as good as mine. Today the party election committee is announcing the name of the person who will be the liaison officer for each of the areas where the candidates have to be selected by poll but no date as to when the actual selection will be.

Anyway, back to the animals. The first is some sad news about Stuffing, or Etuffee as Danilo pronounces it. 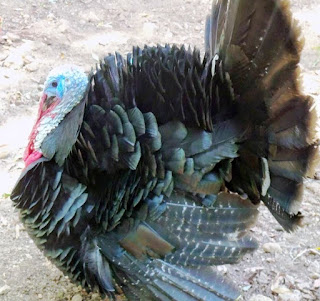 Stuffing, the great friend of Monster and husband to Sprout and father of one (other turkey chicks or poults as they are known, died), has gone to turkey heaven. He had been sick for a couple of weeks, not eating so Danilo was force feeding him, but was also depressed. He wouldn't come out of his house so Danilo would take him out and he would go back in at 6 pm on his own as it was getting dark. This particular night it was raining but had stopped and I went to take the dogs out for their nightly pee and poo run. Danilo was at university. Unbeknown to me, Stuffing had not gone to bed and was lurking outside his pen and the dogs went for him. I tried to get them off him, but it was too late and he was dead.

I decided to save the dogs getting into trouble I would put him in his house so that Danilo would just think he had died of his illness, so that is what I did, and then went to bed.

I woke up when Danilo returned and said sad news about Stuffing. He said he knew and he had found the evidence that the dogs had killed him. I said no, I had just spotted him dead in his house and asked what evidence he meant. He wryly said that the fact his head was not attached to his body was a tad of a giveaway. R.I.P Stuffing.

Stuffing has been replaced by a new male whose name is Cranberry. He has only been here a day but seems to be settling in well, and follows Sprout and baby Stuffing around. 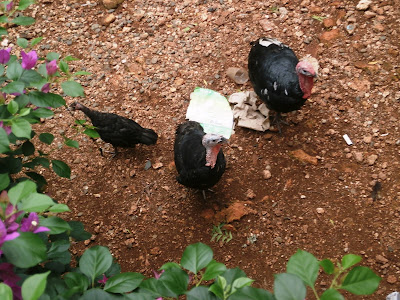 He is only about 4 months old so hasn't start puffing up and strutting and gobbling yet but seems like a happy enough chap. 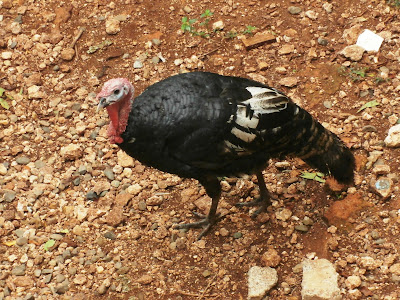 Since Stuffing departed this life, Monster had refused to sleep in the house they shared and has moved in with everyone else into the cellar. I expect it is because he is afraid his head will fall off in the night. The cellar is now getting very crowded at night time as they all jostle for their favourite specs on the stick. 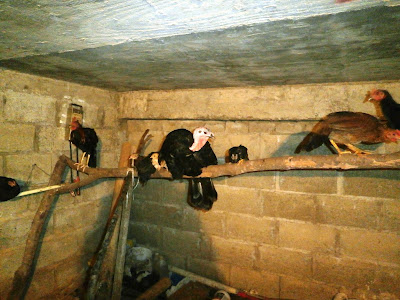 There is now a little more space however as two of the hens, la negra and la india (the black one and the brown one) had been laying eggs in the same plastic container. When they were ready to sit on them it was a tad squashed and when hens sit on their eggs they never leave them. 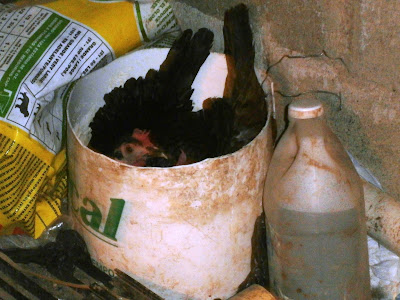 So Danilo made them a bigger nest and now the lesbianas as they are now known can snuggle up together for the next 21 days until their chicks hatch. That could be interesting as the eggs all have the same father - the one and only rapist. I wonder if they know that or whether it will only become apparent when the chicks are born and they all look alike. 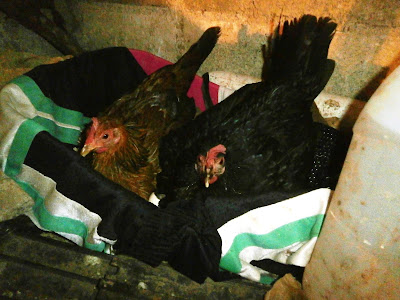 And today, another pair of chickens, with equally inspiring names, la negra 2 and la india 2 who also laid their eggs together and whose father is Monster are now squashed in another plastic container together. Looks like will be busy here in a few weeks time as each pair of hens are sitting on around 15 eggs.

Apart from the feathered animals, we have four puppies left, two of which will be going in a week or so.  They are now 10 weeks old and  are causing total havoc, chewing everything they can and messing up the house. Can you see the state of the floor? That is because they dip their feet in the water bowl, run around in the mud and then run back in the house. 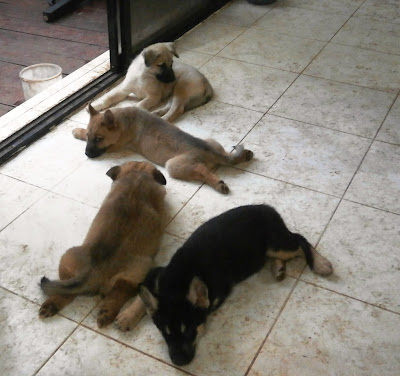 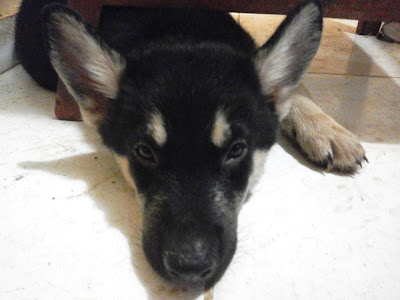 We are thinking of keeping two, this is one called Sweepy (Weespy) who has the most enormous ears which I assume he will grow into one day.