Chivirico and I went off to Las Terrenas for our four day summer holiday. We left Danilo at home to look after the animals (ha ha). The plan was to go and stay with Dan (American) and Manty (Dominican) who own a guest house and then write about Dan's decision to live in the DR and his daily life here for a magazine. 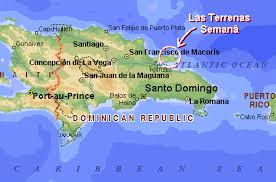 Las Terrenas is in the north east corner of the DR and is a very long way away, which is what has put me off visiting before. But I also had a long list of preconceptions about the place. 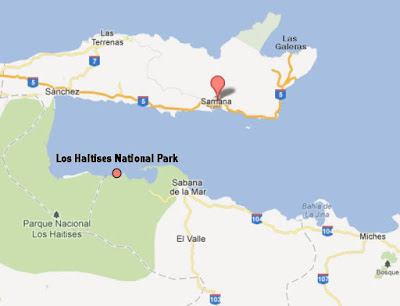 However, it is the only part of the DR that I had not visited and so I was keen to go. We caught a bus firstly to Santiago and were dropped off close to the bus station for Las Terrenas. There are three buses a day - 6 a.m., 11.30 and 3 p.m. We caught the 11.30 and I was pleasantly surprised that although it was a mini bus, it was comfortable, air conditioned and had free wifi. 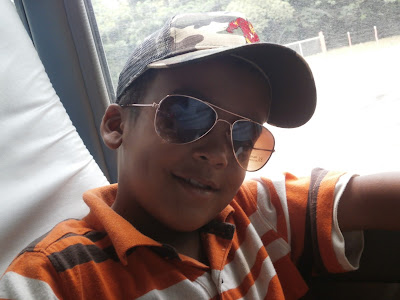 The journey took around four hours with a stop in San Francisco de Macoris for food and the toilets. As usual on the buses here, everyone shared their food, chatted and sang along to the music. Every so often the bus stopped and picked up a guy selling cheese, or sweets or sunglasses and they made a few sales and hopped off the bus again.

Eventually we reached Sanchez which is on the southern coast of the Samana peninsula and drove over the mountain, with stunning views, into Las Terrenas. It was not what I expected. On first impressions it was like Sosua and Cabarete on the north coast which are both tourist towns, with lots of touristy type shops but if you looked closely there were everyday Dominican shops interspersed such as a cobbler, banks, colmados, hardware stores. I also spotted a french bakery which I made a vow to check out.

Dan and Manty's guesthouse was easy to spot. A massive sign right opposite one of the plazas - Plaza Kanesh in the main street. 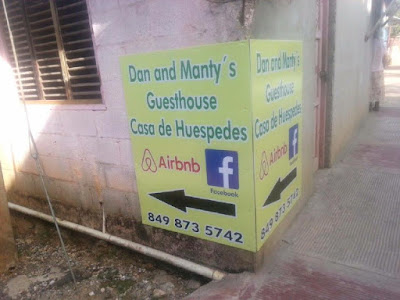 Dan was there to meet us, but it was only around a 50 yard walk to the guesthouse which was like being in another world. It is a large piece of land where Dan and Manty live and so do many of Manty's brothers and sisters, in little wooden houses scattered throughout the land. 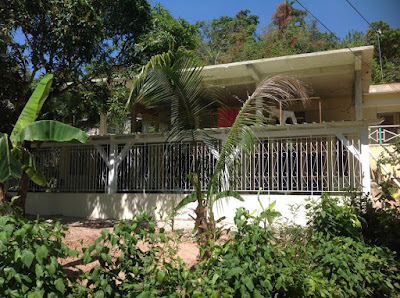 Dan and Manty live upstairs and downstairs there are three guest rooms each with a bed, outdoor sitting area, kitchen, bathroom and all mod cons including wifi and hot water. 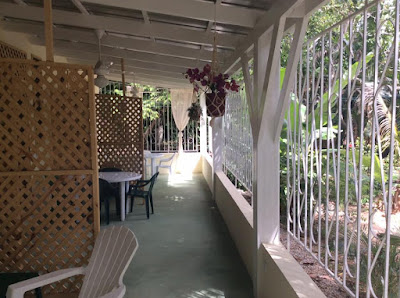 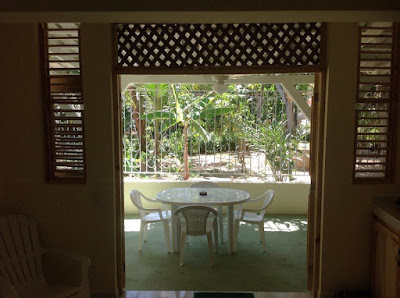 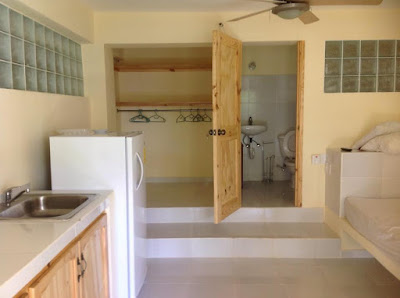 Having been introduced to Manty, Chivirico, Dan and I went off for a 20 minute walk through the town to the beach. I was surprised that there were no people trying to sell us stuff on the street, nor pull us into their shops, and when we reached the beach there were no beach sellers. Somehow the place had a different ambiance than other Dominican resort towns I had been to. It felt more European and more chic. The number of motorbikes and quad bikes was amazing and they were all tearing through the town and along the beach road. 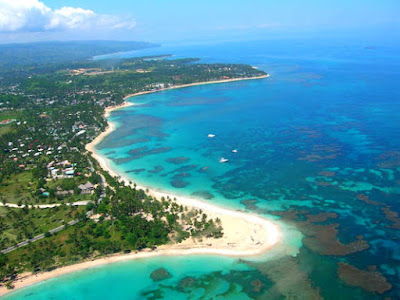 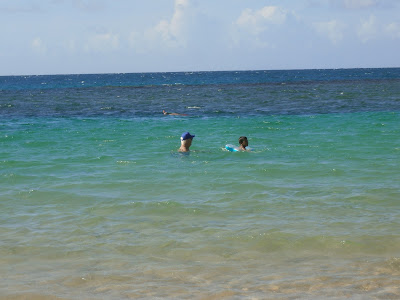 Chivirico was in his element swimming in the ocean with Dan. 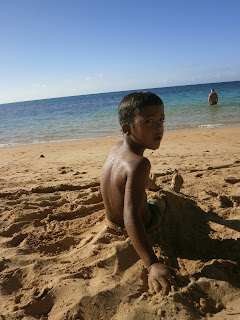 Or doing the obligatory covering himself with sand. 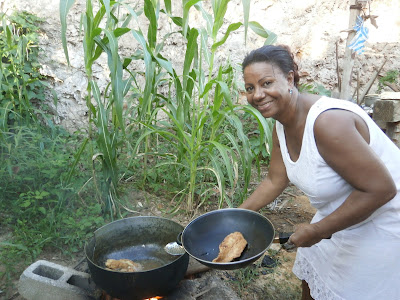 And when we got back to the guesthouse Manty was frying fish on the fogon - outdoor cooking stove.

The following day was a repeat of the first. Walking around town, we discovered the French supermarket, full of things I have not seen for years such as rice noodles, Thai spices, mushrooms, amazing cheeses and the biggest wine selection I have ever seen. We went back down to the beach and Chivirico bought himself a snorkel and mask and planned to catch fish. No fish were caught but he still had great fun with Dan in the water. 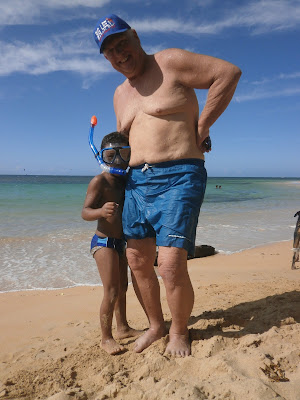 The following day we set off for Mojitos which is a bar on the beach at Punta Poppy. I had written about Mojitos in various travel books so I was keen to see it for myself. 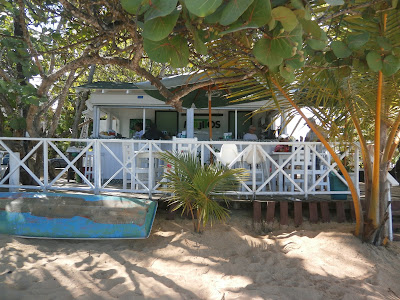 It is one of the best ways I think to spend a day on the beach with food and drink within easy reach, beach chairs and shade. 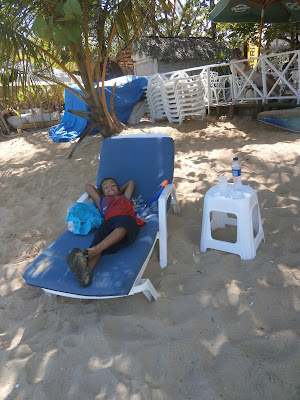 Chivirico spent the day in the ocean and I was taking advantage of the wifi and met a lady who had read my book! Helen and her husband and business partner Doug run a real estate company and a building and property services company in Las Terrenas and it was great to chat. She then took Chivirico and me to yet another beach, even more beautiful - las ballenas. On the way there we passed the famous fishermen's village which burned down a few years ago but now has been rebuilt. A lovely row of charming wooden buildings mostly used as bars and restaurants, overlooking the ocean. 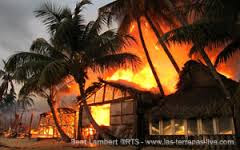 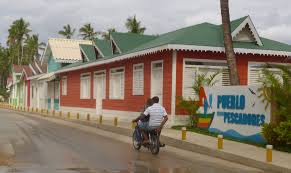 We ate with Dan and Manty again that evening, and after dinner, Chivirico cooked his famous coconut biscuits. 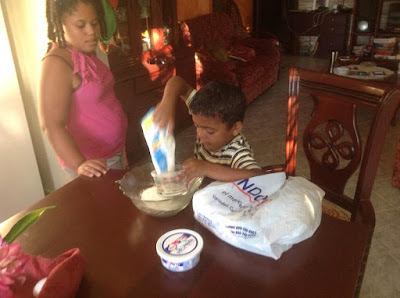 All too soon it was time to come home. We caught the bus back to Santiago at 6 a.m. buying fresh pan au chocolat from the French bakery which was open even at that time in the morning. By noon we were back home.

So. Las Terrenas. I thought it was small - it isnt, the populataion is over 40,000. I thought it was full of French people - the only French accent I heard was the baker in the French bakery. I am sure they are there but I didn't see them. I did see and meet a whole range of other nationalities. I didn't see the usual expat drinking at the bar. All the expats I met were working, most with their own businesses. The beaches were much better than I imagined, as were the shops and facilities. I thought it was a long way away from everywhere, but with all of the new roads it is only now two hours from Santo Domingo, and there are five buses a day, and four hours from Santiago with three buses a day.  I thought it would be expensive but it wasnt as bad as I thought. Dan and Manty's guest house is RD$1000 a night which is around US$22 for the room, which was lovely. I had no idea there were so many backpackers in the area, and talking to them they were all travelling round the country and the DR is now a popular place for backpackers with hostels opening up all over the country.

I realised as I was walking around that it really is important for those who want to settle here to visit the whole country before making a decision as had I visited Las Terrenas before, I am sure it would have made it to the top of my list as a place I wanted to live.
Posted by Lindsay at 2:25 PM 1 comment: