The whole election shenanigans are coming to an end. The court sort of went to sleep even though the delegates signed a paper to say they were not present at the count, so the local electoral court had forged their signatures. So no result to all our work. But we are now suing for fraud in the civil courts and looking for compensation. I don't hold out much hope but we will keep on fighting.Unfortunately the people of Guayacanes, most of whom voted for Danilo are stuck with a mayor who did nothing and who will do nothing. It really is a travesty of justice and they are the ones who will suffer.  In the meantime, word is on the street that to "apologise" for cheating and fraud,  the government will give Danilo and some of his team a job - on August 16 the new government takes power and all of the jobs change. I will believe it when it happens.

While waiting for University to start again, Danilo has been clearing the land. We have like four or five acres which became overgrown as he was off campaigning and given the drought last year most of it was dead. Anyway as he cleared it he found four grapefruit trees, an orange tree, two mango trees, and avocado tree and a guanabana (soursop) tree. They all look pretty healthy so hopefully they will deliver fruit in a year or two.

I was feeling pretty tired last week, which isn't usual for me, and pains in my hands were waking me up in the night. I was a little concerned I had arthritis or rheumatism and hands are essential when you are typing all day long. Then, a week or so ago I got up and felt worse. Eyes were bright red and sticky, hands and feet hurt and I was covered with a rash from head to toe. Well hello Zika! I have escaped dengue since I have been here, which is just as well as I have had it twice - once in Singapore aged 8, and once in St. Lucia when it was hemorrhagic dengue. The third time will be even worse. I also escaped Chikunguya so I can't moan just getting Zika. It was gone within five days and I was all back to normal, but loads of people seem to have it at the moment.

We were having problems with our Sky satellite TV as the signal kept going in and out, so Danilo decided it was because the trees in the mahogany wood next door were too high. Easy to fix, just take shoes off, put machete between teeth and climb 60 feet up a thin swaying tree with no safety gear and lop top off

When he reached the top, he lopped the top off (hoping that the Ministry of the Environment would not appear as you can't cut trees down without permission - especially mahogany trees) and then I noticed the satellite wasn't pointing anywhere near that tree! A day later the Sky satellite stopped working all together, called Sky in Mexico where I didn't understand a word as Mexican Spanish might as well be Chinese, but Sky man turned up today and fixed it all. No need to cut down any more trees.

The pups are growing - looking super cute but should go to new homes soon. Maybe apart from Lobita 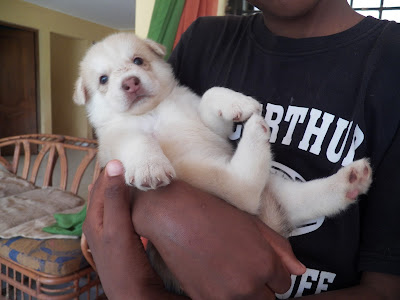 Email ThisBlogThis!Share to TwitterShare to FacebookShare to Pinterest
Labels: campo life, Cats and dogs and other animals, Dominican politics

I promised to update you on the building projects.

The first is the new hen house - well, the hen apartment building really. We had to move the hens around to the back of the house to stop the dogs getting to them and to try and prevent the neighbour's chickens coming in to visit. I had no problem with them visiting, but the dogs didn't appreciate it, and the chickens usually did not make it home after their trip.

I have to say that recycling took on a totally new level. Adios balcony. 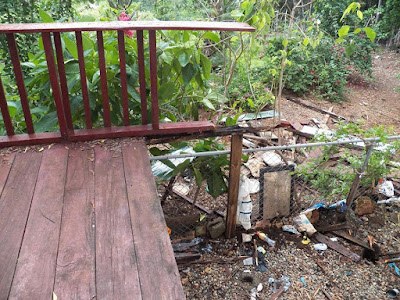 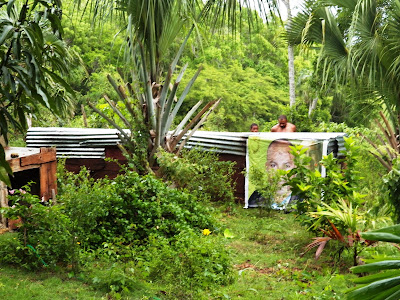 It is in the back garden just behind the barbecue, which will be useful if we want fresh roast chicken, but he ran out of wood so used one of his campaign posters. Now call me Mrs. Sensitive, but do I really want to see a campaign poster every single time I look out of the window - I think not. At least it blends in as it is green.

There are four chicken apartments. 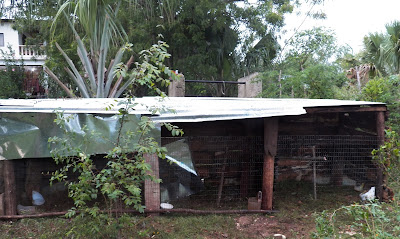 Each one has a food and water bowl, a stick to perch on and a nesting area, as each one has a cockerel and a hen. Once the hens are sitting on eggs, the cockerel gets moved to another apartment - he had to build another four! We also now have a nursery apartment where the mum and chicks can go once they are born. Impressive or what?

As I mentioned the election I will update you. The fat lady hasn't sung yet, but I think she is in the dressing room putting on her make  up. We have had weeks of backwards and forwards to court, providing proof that Danilo's and others' delegates were not allowed in for the count. The latest is that, without going into detail at this stage, it appears that the delegates signatures were forged and today, supposedly, all of those involved will be interrogated. Hopefully we should know if there will be a recount by early next week - although to be honest it is getting a little late in the day. The fight goes on. We also have a case going through the Constitutional court, but given that all the judges change on August 16 when the new administration comes in, no one seems to be doing much work.

Life is not particularly easy at the moment, it has to be said. Danilo's car broke - yet again and it seems it needs yet another transmission - a mere US$1,000. How a car needs a new transmission every 12 months is beyond me, but mechanics here are a law unto themselves. Most don't have a clue, and they are experts in saying that they have bought a new piece and they haven't. I always say let them give you the receipt for the new piece, but apparently things aren't done that way. Anyway the car is fixed but we can only have it back when we have paid for it - which may take a little while.

In the meantime the gas for cooking ran out as I was making pizza the other night. No car, no taking gas tank to be filled around five miles away and here there are no motoconchos. Danilo leapt into action, collected wood and said we now cook outside on the barbecue. I was extremely suspicious. it is one thing using a wood fired oven to cook a pizza and another to put it on a barbecue. My concerns were justified as I looked out of the window and saw the pizza on fire. (It was very dark). 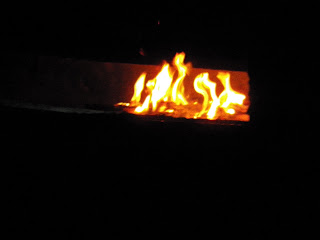 In the event it was delicious and had a lovely smokey flavour. 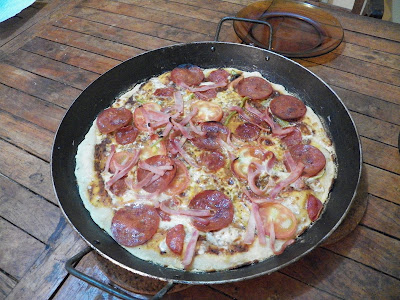 And the following day, it was back out to the fogon to make fish soup, and by now I was getting the hang of controlling the temperature by pushing the logs in (they are set up in a star formation) to increase the heat and pulling them out to decrease the heat. Not sure we will go back to a proper stove now! 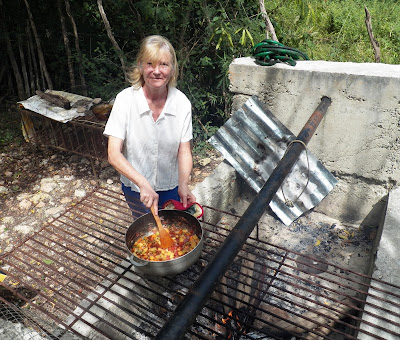 The house has also been full, as we have Danilo's nephew living with us, 10 year old Albert who used to live with stepson Alberto, but as Alberto has lost his job in the Free Zone as the factory has closed they couldn't afford to feed him, so he is now here. The days of kids eating everything in the fridge have returned unfortunately, but this time I am older and wiser so he has his own shelf in the fridge and everything else is off limits. Chivirico was also here for a couple of weeks, which made Danilo very happy to have two little dwenditos to follow him everywhere. 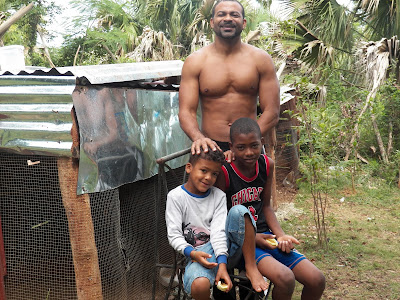 And the kids managed to amuse themselves by making catapults and traps to  catch whatever with long strings on them. They sit in the garden for ages, waiting for something to come in the trap so they can pull the string. Luckily they have caught nothing so far. 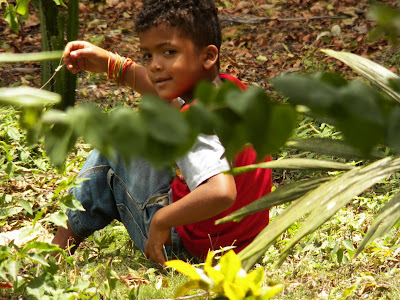 And to end on a mixed note. Matilda, my 15 year old cat, who never went outside, disappeared a couple of months ago, never to be seen again. She was not ill, but did have Alzheimer's. I looked for weeks but no sign. 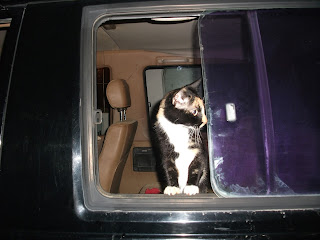 But as one life ends, another begins, and Grita Mucho had 4 pups. Four more little huskitas, just over a week old. Mother and pups doing well. 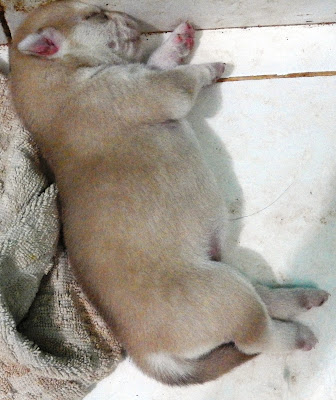