The heat goes on

Another three weeks disappeared in a flash.

We are in the middle of a heatwave which has been going on for 2 months now, with only a couple of days of rain which is strange as we are supposed to be in the rainy season. During the day temperatures are in the 90s even here in the mountains and apart from the heat we have no water.

The whole country is experiencing the drought and we normally get water delivered every 2 weeks by pipeline but now they are delivering none at all so we have to buy it from the water truck. This is not cheap. It costs RD$1600 which is around US$40 for enough water to last a couple of weeks and that is without watering the garden or washing the cars. 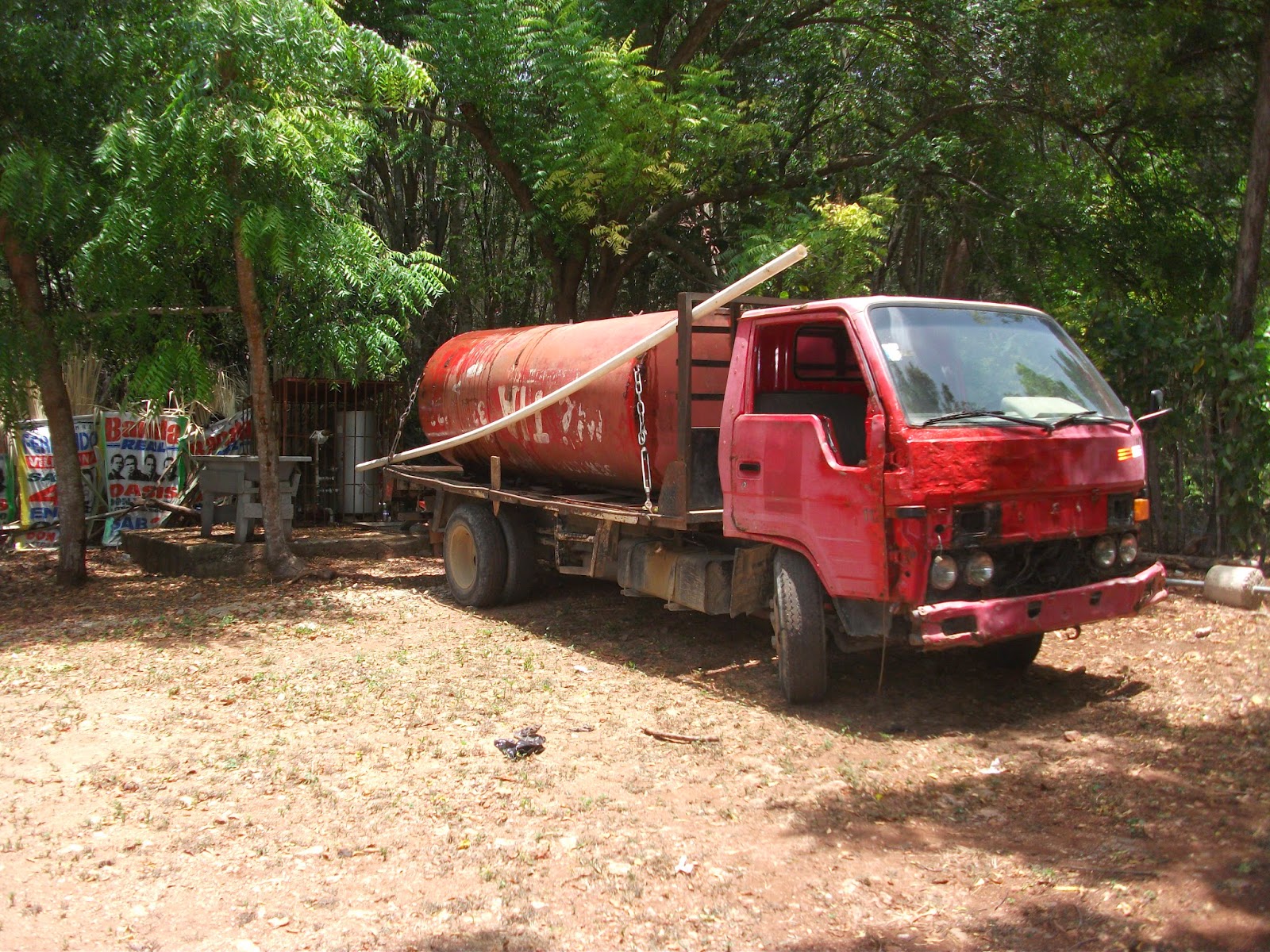 I have no idea where the water trucks get the water from or if they have to pay for it. One thing is for sure and that is that someone somewhere is getting rich from the drought. We buy water to drink and that costs RD$30 for a five gallon bottle and we use two a week. In some parts of the country, where they can't afford a whole truck load and they have no access to a river, they buy the drinking water to use to shower and wash dishes. Now the price of drinking water is also going up - in some instances up to RD$100 for a bottle. A three fold increase.

However a two edged sword might solve the water problem. This has been a very quiet hurricane season but there is a potential one on the horizon to be named Bertha if she develops. Just in time for two visitors i have arriving on Wednesday for a week. 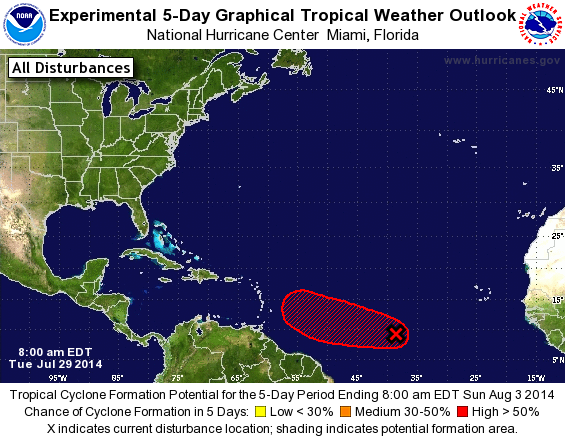 We have spent the last week cleaning house and garden in preparation for the arrival of 2 of the sisters from DRsisterhood. All of the local men are beside themselves with excitement and sprucing themselves up hoping to get lucky! One even sent round yuca, mangoes and avocados hoping it would improve his chances. 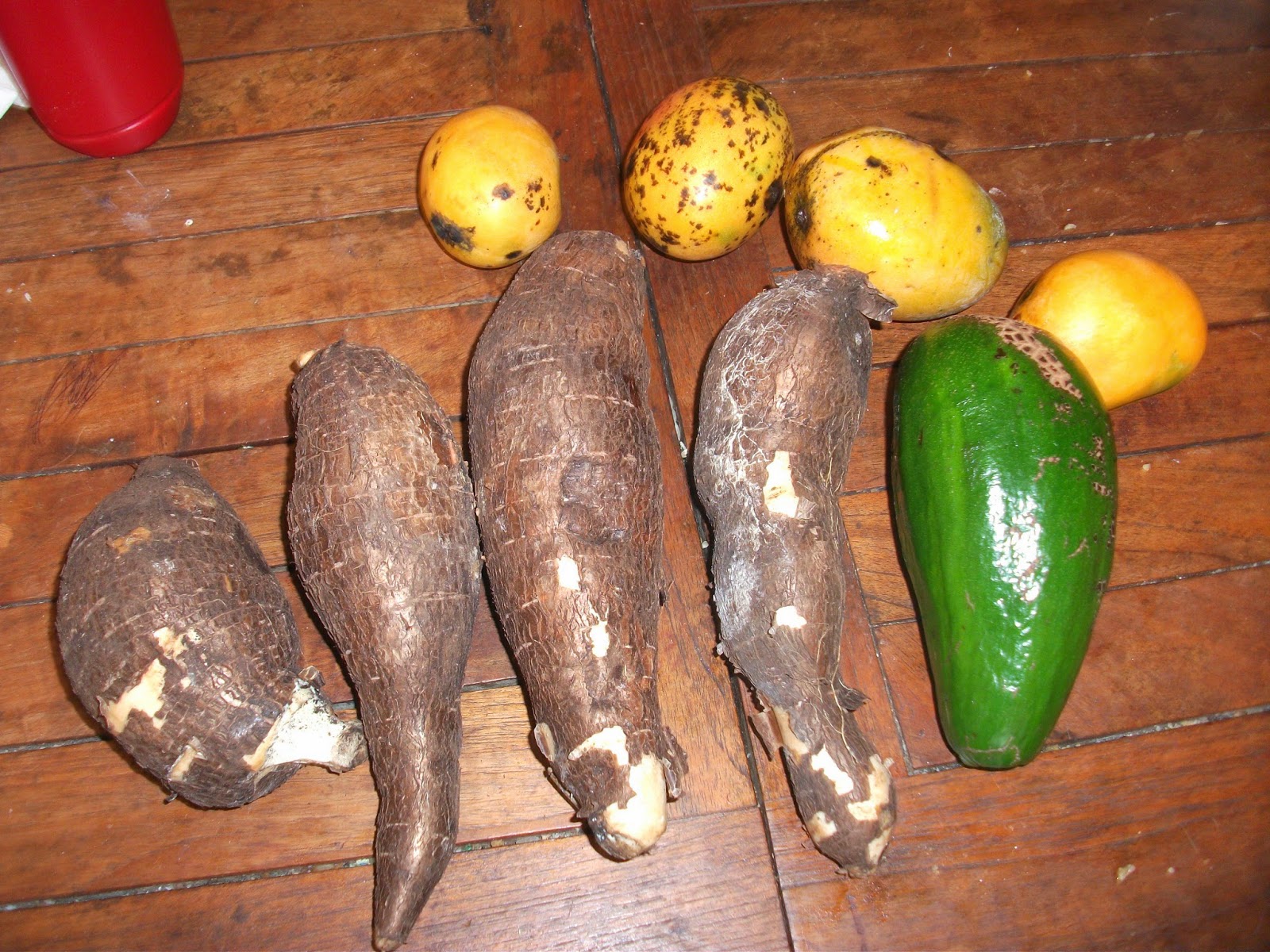 I will report back after they have left. All sorts of things are planned like going to a concert, day out at the river, sitting in a park eating empanadas and they will be bring loads of US and Canadian food with them including the all important Cadbury chocolate so I can't wait! Chivirico is beside himself with excitement and has been collecting eggs each day and baking.

Watch this space - even the dogs are watching and waiting! 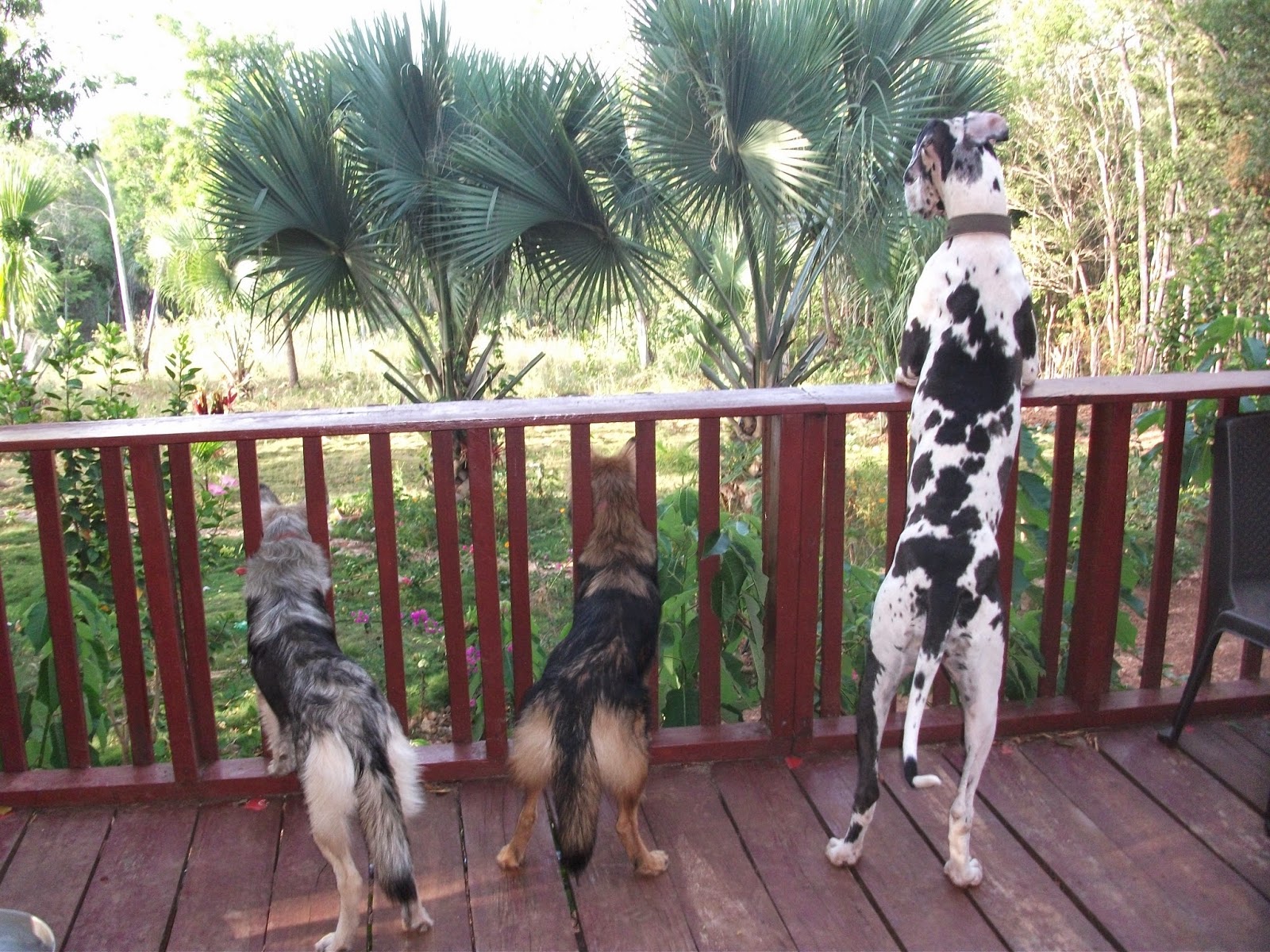 Goodness where does the time go? I had no idea it has been 3 weeks since I last blogged. Well as usual nothing stays calm for long here.

The first problem has been that it looks like I will be losing my biggest freelance job which is our main source of income so it has been time to look for something to fill the considerable gap. There is no social security here so if you don't have money coming in there is no back up. The DRsisterhood site is providing some income and I am enjoying helping people out on there and in addition I have registered with several freelance job sites and managed to pick up writing the odd article and brochure here and there which has been interesting. I am now like those actors who say they can ride a horse to get the part - I say I can write about anything!

Obviously to be able to work as a freelance writer you need to have internet and electricity. Last week there was a massive storm. It started at three in the afternoon and this is what it looked like outside. 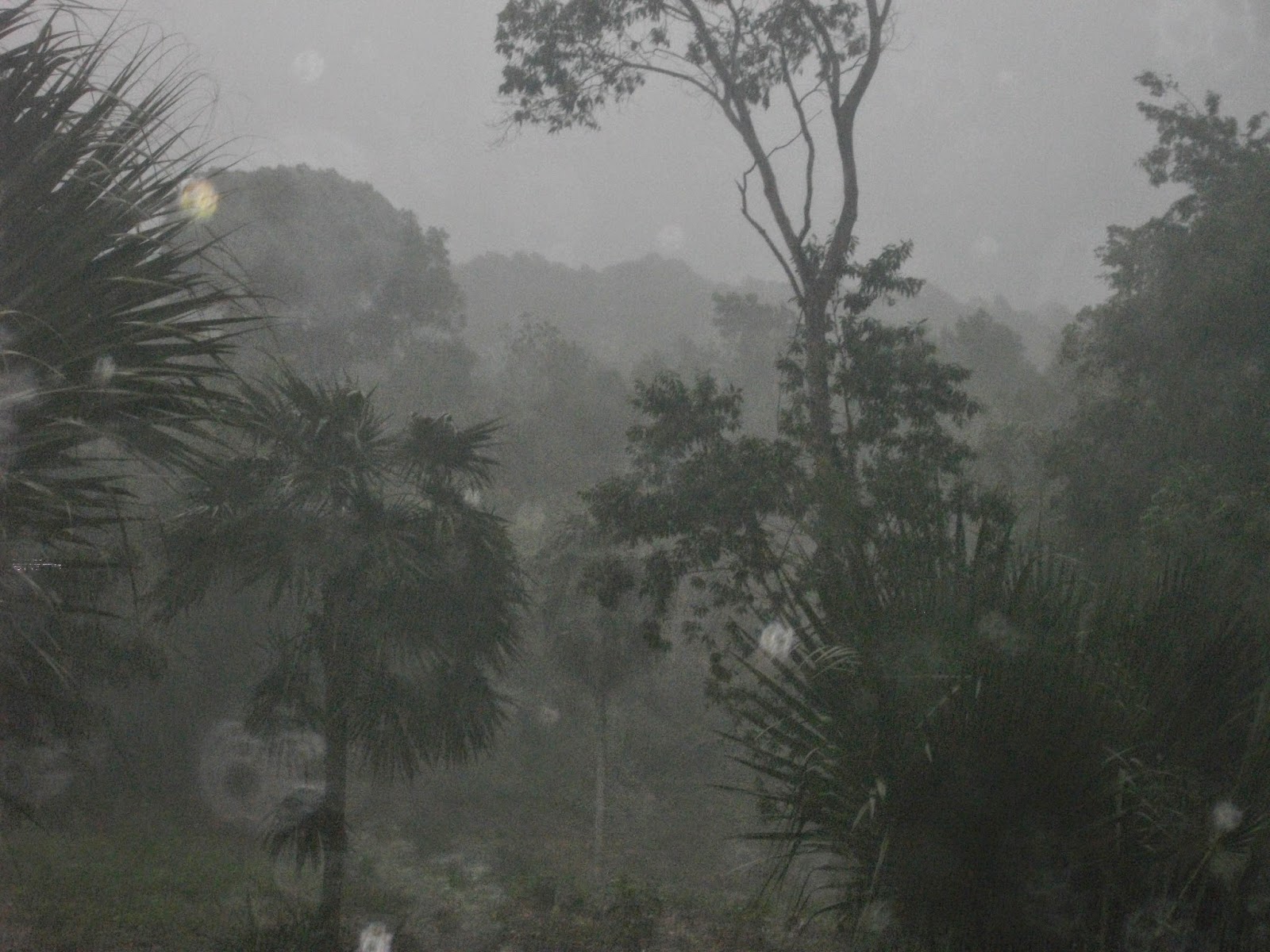 I ran around the house unplugging everything, as you do before a storm, and then it started. Torrential rain and massive claps of thunder with lightning all over the place. The electricity went off - they usually turn it off in a storm in case trees bring a line down and someone gets fried. One bang shook the whole house and I wondered if we had been hit. In between mopping the water which seems to come in through every window I was desperately trying to get an article finished for a deadline using a usb stick for internet and the lap top battery. I made it just as the battery died.

The electricity didn't come back until it was dark and I only knew it was back as the shout rang out around the campo "Llego la luz!". It had arrived everywhere but not in my house. A neighbour came to help me investigate and he discovered the main switch was set to 'off' which I thought was odd. The switch is in the basement where a couple of hens, a cockerel and 24 chicks are currently living, so I thought maybe the hens had pecked it to 'off'. He switched it back to 'on' and hey presto there was light.

Until I went upstairs, which was in pitch darkness and I couldn't find the light switch. Further investigation revealed that I couldn't find the switch as it wasn't there any more. It had been blown off the wall, as had all of the light switches and all of the plug sockets. The internet was fried and there had been a fire where the transformer for the modem was. Which I had been blissfully unaware of. The water pump didn't work and nor did the hot water nor the internet - probably as the transformer was now a melted blob on the wall.

To cut a very long story short, the internet aerial on the roof had been hit by lightning and taken out everything electrical upstairs. Luckily as I had unplugged everything, we just need to fix the electrics and buy a new transformer, internet receiver at the top of the aerial, plugs and light bulbs. The internet is now fixed, but took a while as the internet man has had his phone cut off. He has now told me to add him to Eskippy. I had no idea what he was wittering on about until he wrote it down for me - Skype. I explained how it was pronounced and that Eskippy was actually a kangaroo, but he told me I was wrong as there was an 'e' at the end and you couldn't just ignore it. And he had never heard of Eskippy being a kangaroo. Eskippy it was and Eskippy it stays.

Anyway, the water is now fixed too and the electrician is coming tomorrow for the rest. As well as fixing everything he will earth the house which should help next time. Assuming he knows what he is doing which is far from certain.

I thought that would be it on the bad luck front, but yesterday afternoon, one of the pups started barking and I looked up, and there chomping on my parsley in the garden was an enormous brown cow. All of his friends and relations were just behind him. It took about an hour to get them all out of the garden and one of my neighbours said I had to get money off the owner of the cows. The law of the campo is taken very seriously and the cow owner would have to pay for the damage. The next thing I knew, the local mayor turned up. He must be around 90 years old and carried out a full inspection of the garden, then pronounced that he would tell the owner to pay RD$5,000 pesos for the damage. Danilo felt uncomfortable about this, so it was agreed that the owner would instead receive a final warning, but the next time his cows invaded us he would have to pay.

And finally, something to warm the cockles of my heart, even with all this chaos and stress going on there is always something to make you smile. I mentioned the two hens and 24 chicks and the cockerel in the basement. Each hen has 12 chicks but one of the mothers is a nasty piece of work and attacks the other chicks, so she has been moved out. I went to check on her chicks to see if the other hen was looking after them. I didn't realise before, that after chicks are born they all sleep under their mums to keep warm, so I was hoping there was enough room for all of them under the one mother down there.

It was not the case. Dad had stepped up to the challenge and he was looking after all of the chickens! 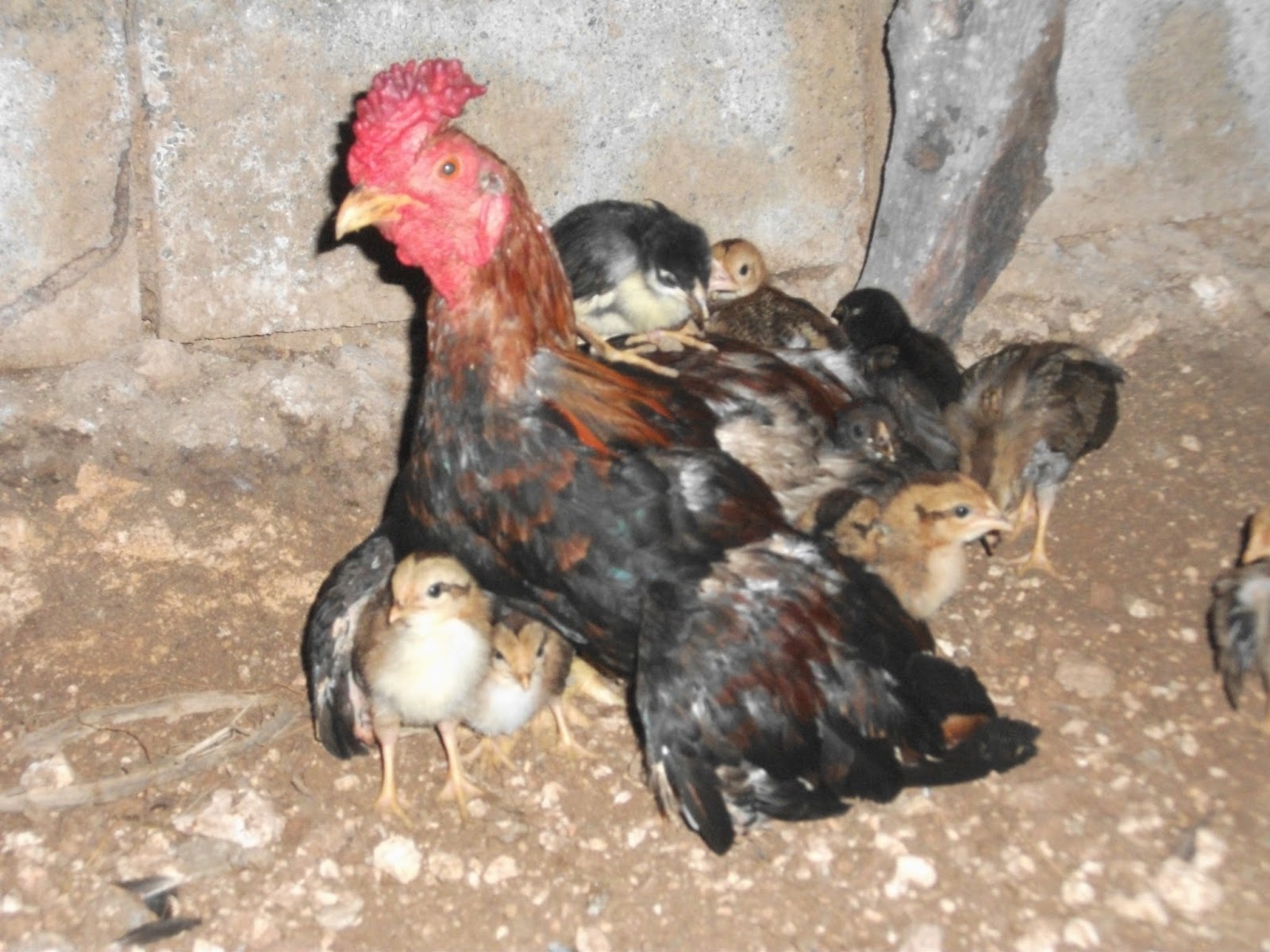 They were all over him, including on his back. Life in paradise.
Posted by Lindsay at 11:18 AM 9 comments: