From cows to chicks and ...wait for it.

Danilo came home from university late one night last week. I was in bed and he called me to come and look. He had found a box of chicks dumped at the side of the road. It appears they were dumped battery hen chicks which did not meet the minimum requirements to be a battery hen - lucky them. There were 55 of them. We kept them in the study overnight, gave them antibiotics in their water and a heating lamp to keep them warm. 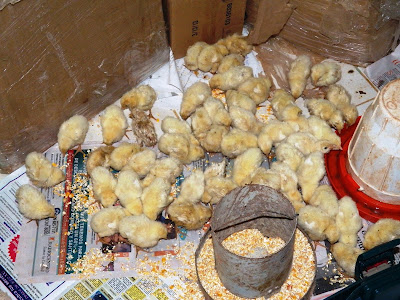 The next day they went into the basement and were allowed out in the day to feel the sun. Very happy little fat yellow chicks who behave totally differently to the other baby chicks, which just potter about. These run at top speed! We were concerned that the other hens would attack them but they don't touch them. Danilo says it is as these are Americana chicks, gringo chicks and the others respect them lol.

Then fish man turned up again and this time he brought us dorado which I am not sure what it is called in English. The dictionary says Mahi Mahi or Gilt Head Bream but it is neither of those. 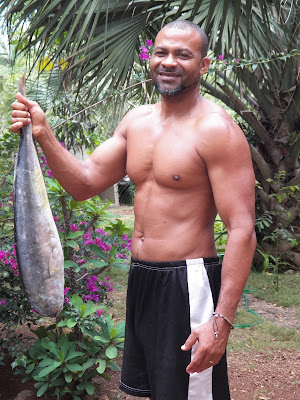 This fish is a monster, well around 6 pounds and we are saving it until my citizenship is sorted - if that doesn't take too long.

The work on the goat fencing has come to a standstill as Danilo is too busy with exams, but when he was at university on Friday, he had just left after lunch, a car arrived with the two stepsons, Dany and Alberto, Saya the dwendy and another guy. They brought with them a box of mangos which was nice, and two goats. Yes goats. It appears that the other guy in the car had won them in a raffle at the cock fighting ring, and as he owed Alberto money, and couldn't pay, he paid with two goats. Alberto has nowhere to keep goats, hence they came here. It is now vital to get the fencing done and to build a house for the goat so that is next on the agenda.

In the meantime here is brown goat 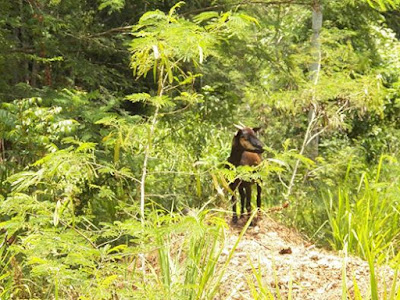 And here is white goat 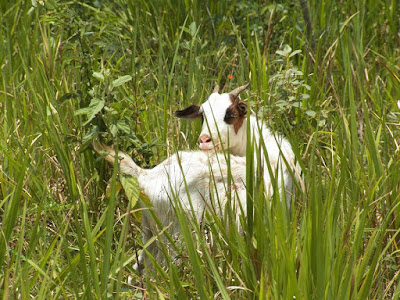 They are cute, and wag their tails when you go and see them, but have to be on long ropes tied up until the house/enclosure is ready. Danilo had better hurry up as they are both pregnant. In fact the white one will probably give birth before I write the next blog. I hope she can do it all by herself as I have no idea what to do!