Not dead and not in jail

I am sorry. I had no idea it had been so long since I blogged apart from a vague nagging voice in my head saying, "You should blog today," and then the letters and the emails started to arrive from blog readers asking me if I was OK.

Yes I am fine, and I promise not to worry you all like that again.

I have no real excuse apart from the fact that I have been horribly busy. I do some work for an American gentleman who runs a business providing copy and blog posts to American lawyers in the main. Normally I work for him doing one blog post a day about cruise ships - man overboard, rapes, murders that sort of thing, and then the last week of the month doing 70 blogs for accident attorneys. This is again such delightful things as people being killed in accidents. All very non cheery stuff, but it keeps the wolf from the door. Anyway, in July he asked me to help write a website for each of the 50 U.S. states on dog bites, which turned me somewhat paranoid thinking my dogs were going to bite me, and then this month same thing again, but on nursing home and elder abuse. Equally distressing and I now know all about dementia when it hits me.

So I really have had my nose to the grindstone and at the same time, Chivirico has been on school holidays so he has had to be entertained - not that that is hard. Here he is watching television with one of the cats, Mariposa. 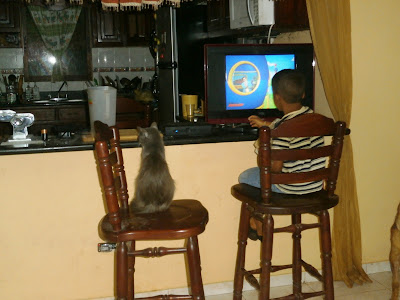 And after one day, when he was particularly mucky he had his very first English bath. I think he liked it. 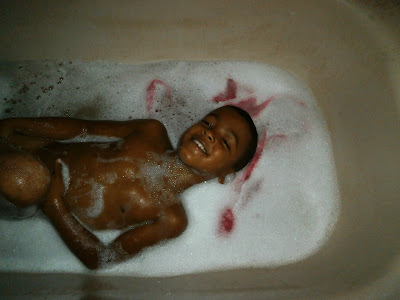 The animals are all fine but obviously something is in the air as they are all producing offspring. We had a bit of an issue with Parsnip the turkey as one day she changed sex into a male and started pecking lumps out of Stuffing, so Parsnip had to go and is now living at Chivirico's house. We had no idea she/he was a male until suddenly his thing on his nose grew and he started strutting like a male. Sprout on the other hand continued her love affair with Stuffing and laid 13 eggs. She has been on her nest for 10 days now, and in 18 days baby turkeys should arrive, so they will be ready for Christmas. 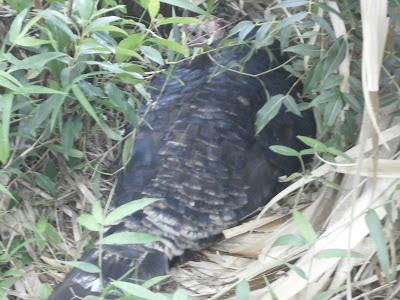 The only problem is that she has not made her nest on our land. It is next door in a very overgrown plot so to go and check on her you need a machete to hack down the undergrowth. 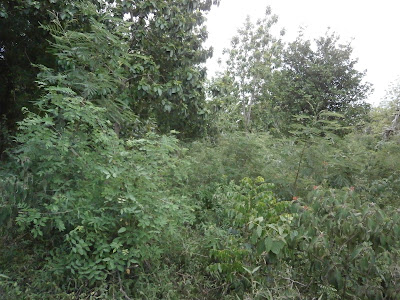 The dogs are all fine as are the cats, but when Belinda and Meg were on heat, in true laissez faire Danilo fashion he left the door open, and a few minutes was all it took for Lobo to have his wicked way with Meg. He tried with Belinda but just couldn't reach although his acrobatics were fun to watch. Meg delivered eight healthy pups last night so once again the house is full of squeaking and the next few weeks will be fun. 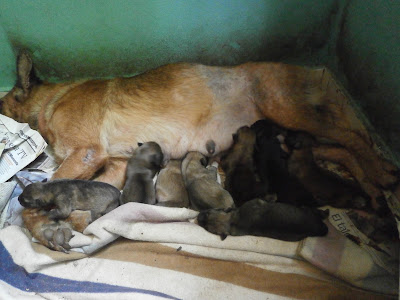 Following Leida's death I think the campo had enough trauma and sadness, but unfortunately it carries on. Barbara, who lives next to Leida and Sukin the colmado man, has been diagnosed with cancer, plasma myeloma although she doesn't actually know what it is as the family don't want to tell her. I had never heard of this cancer but it really is horrid. The upshot is that she was very anaemic, bone pain and then kidney failure. The treatment is chemo, but the cost is US$4,000 a month which the insurance company won't pay and no way can anyone raise that amount. She has to have it for 8 months. So for the last couple of months she has been having dialysis and comes back to the campo most, but not all, weekends. She has lost an awful amount of weight and the family are just trusting in God that she will recover.

At the same time another neighbour, not even 50 I don't think, has a brain tumour. Apparently it is benign but growing and he has already lost most of the vision in his left eye. It can be safely removed apparently but will be taken out via his nose rather than cutting his head open. He has insurance but the insurance company have said that they won't pay for the via the nose surgery. He needs around US$14,000. Mind you over half of that is the fee to the surgeon and anaesthetist - greedy sods. Anyway it just seems unfair as he pays insurance so is responsible. I have written to the President of the DR to see if he can help - as if not this guy will die and that can't be allowed to happen.

So happy days. In the meantime the DR is in the middle of an immigration nightmare according to foreign press but I won't bore you with my views on that apart from to say I am totally illegal as my British passport is in the UK being renewed which takes three months and my citizenship isn't through yet although it should be soon. Two of the security checks have been done, but we are just waiting for Interpol. Hopefully in the next couple of weeks then I need to be sworn in, get Dominican birth certificate and ID card and yay. I can then vote.

Having said I can vote, who knows what is going on with the elections and Danilo standing for mayor. Again it would take ages to explain so will try and do that in the next post which I promise you won't have to wait for so long.

I will leave you with a picture of our yellow flame tree which we planted when we came to the house. This year is the first time it has flowered. Usually they are red and we planted both, but the first ones to flower were yellow. 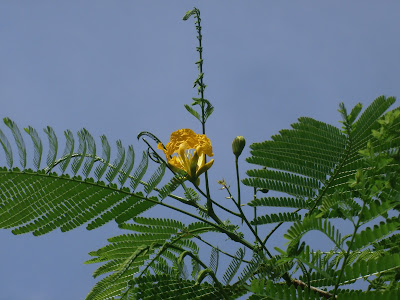 And look at them now. 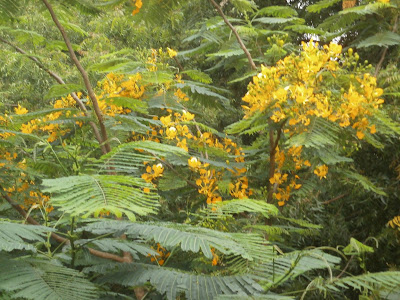