Teach me to keep my mouth shut

I had just finished blogging a couple of days ago saying how quiet it was. Idiot. I pressed published and all hell broke loose.

Danilo put all of the hens and roosters in houses at the front of the house to make it easier for me to feed them and less chance of the puppies murdering them. However one black hen, called Coja (lame) as she limps was sitting on eggs in the wood next to the house. Every two days at 10 am precisely she comes to the back door to be fed and watered and then scuttles back into the woods. This day she did not turn up.

I finished blogging and all of the dogs went onto the precarious balcony and were barking at something. I assumed there was a cow in the garden and really was not looking forward to herding it and its mates but when I looked everywhere, there was no sign of any cows. In the end I went out to investigate and there were 10 chicks just in front of the balcony and Coja inside.

The balcony has a wrap around dog house that starts at the front of the house and goes all the way round. We boarded it up at the back and cut a hole in the wire and use it as an extra hen house. 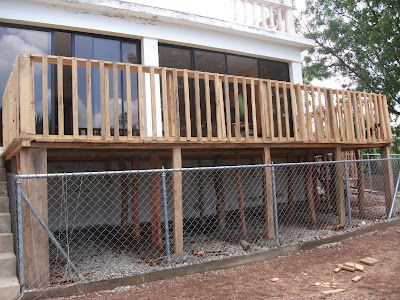 Coja sensibly wanted the chicks inside but as it has a concrete step at the bottom, the chicks couldnt get up to get through the wire. I got some celery and laid a trail for Coja to get her outside, through the opening which there is now, and put a bread board there as a ramp for the chicks. Slowly one or two started to go in. I went back inside and heard cheeping and one stupid chick had somehow made it onto the dog side of the run. Dash into dog run and rescue said chick and went back outside to put in inside the run. Coja was in the far corner with a couple of chicks, so I scooped the others up and put them in with her. I could still hear cheeping and lo and behold, Sweepy the puppy is in the garden with a chick in his mouth. Run over and rescue chick who looks pretty badly injured and put it back in the run with mum. 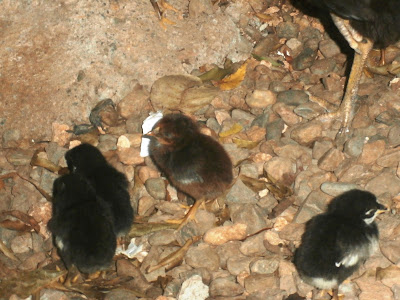 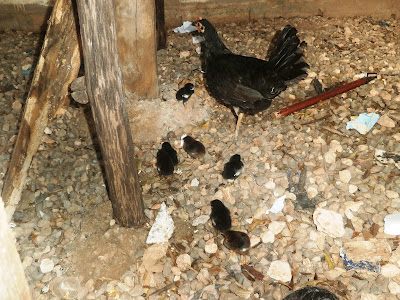 There are eight black and brown chicks and two yellow ones, and it was one of the yellow ones Sweepy had got at. The problem is it can't walk now and flaps its wings to try and get a little momentum which works unless it is stuck behind a wooden pillar. When it can't get to mum it cheeps at the top of its voice, so I have to run outside and rescue it. Given that I cannot get into the hen house I have devised a series of handy scoops to scoop it up and then deposit it where mother hen is. One is a margarine tub on a piece of string so I can put the chick in the tub and then lower it down on top of mum and jiggle till it falls out. I can only use that thought if the chick is close to the fence and I can get my hand in. If not I use useful chick scooping tool number two, which is a kitchen sieve taped to a broom handle so I scoop it in that and then transfer to the margarine tub.

I am pleased to announce that chick is still alive and now appears to have one leg working so is even getting around better.

In the meantime Sweepy continues to be a pain, escaping hourly from the garden and looking hungrily at the chicks. Given his mum is brown and his dad white I have no idea why he looks like a black German Shepherd and  at five months old he is bigger than both of them and the most disobedient dog I have ever known. I really cannot believe how he could be so cute as a little pup and now such a monster who has a total mind of his own and adores eating chickens. 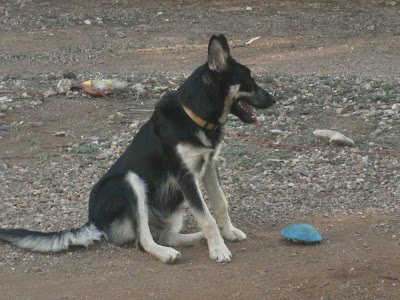 Now time to head off to the colmado up the road. I laugh every time I walk up there as I pass this place... 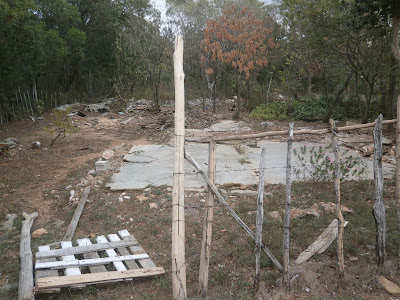 An elderly man used to live in a wooden house here, which was built on top of the concrete base you see. He died and as is normal he left his house and possessions to his kids. But he didn't own the land, so they just came with a flat bed truck, took the house down, plank by plank and off they went. At least they ended up with a house!
Posted by Lindsay at 1:38 PM 4 comments:

Danilo's launch as candidate for mayor for Guayacanes with his new party, the PRL went well. Apparently there were over 3,000 people there which is almost everyone who lives in the municipality. 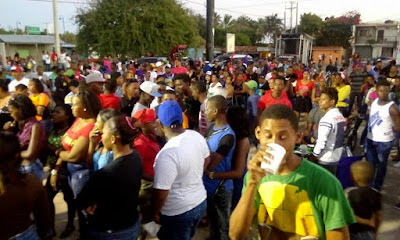 He was even emblazed across women's chests. 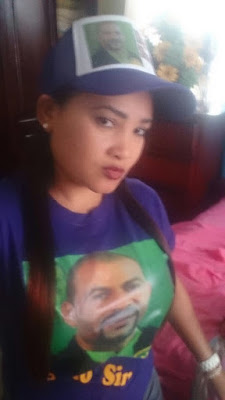 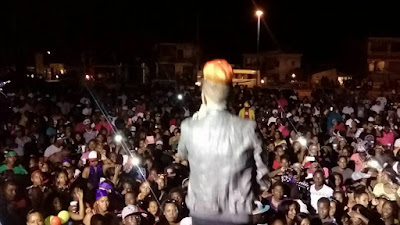 He actually does sing opera - well sort of opera, but I don't think Pavarotti has anything to worry about. I don't have a video of him at the launch but here he is along with the obligatory female boobs and buttock shaking and him crotch clutching. If it doesn't work embedded you can watch him here.

The latest polls give Danilo over 80% so if he can keep it up he may even win and while he is away being famous, I stay at home and look after the animals. Well, I don't do a particularly good job as I seem to lose a few chickens each time he is away. This time one of the neighbour's fighting cockerels escaped and got into our back garden and fought with our nice tame cockerel. This happened at around 6.30 in the morning so I ran outside and yelled for the neighbour to come and get his rooster, which he did. He also picked up our rooster and tried to hand it to me covered in blood. I don't do holding roosters and especially not when covered in blood. Also I have no idea how to cure them, so I told him to keep hold of it and make it better. He first said it was dying, then it was fine, just appeared to have lost its eyes. In the event he had lost only one eye and recovered.

Apart from that little incident it was actually quite a quiet time, and Danilo came back for a while to do the jobs which needed doing such as to fix the water pump (he had to call a man to fix it) and mend the fence so the puppies could not escape (puppies took 5 minutes to escape again).

I also had an American visitor who came for a couple of days which was lovely, and she came laden down with dried mushrooms, Indian spices and dog treats and toys.

The blog is now being translated into Spanish a couple of days after the English version has been posted so if you want to read it in Spanish you can do so here. The same person who translates the blog is also translating the book into Spanish which is very exciting, and really wierd to read it in Spanish. One chapter done so far and ten to go.
Posted by Lindsay at 10:31 AM No comments: