The Sanky goes to jail

I was really upset with Mrs Monster so I had a word with Danilo and he agreed to send the sanky to jail for wife stealing.  El Violador is now jailed under the balcony. He has plenty of space and has two of his women for company. One has a couple of chicks and the other sitting on eggs so they aren't that interested in him and he spends the day looking longingly out at the rest of his flock and Mrs Monster. 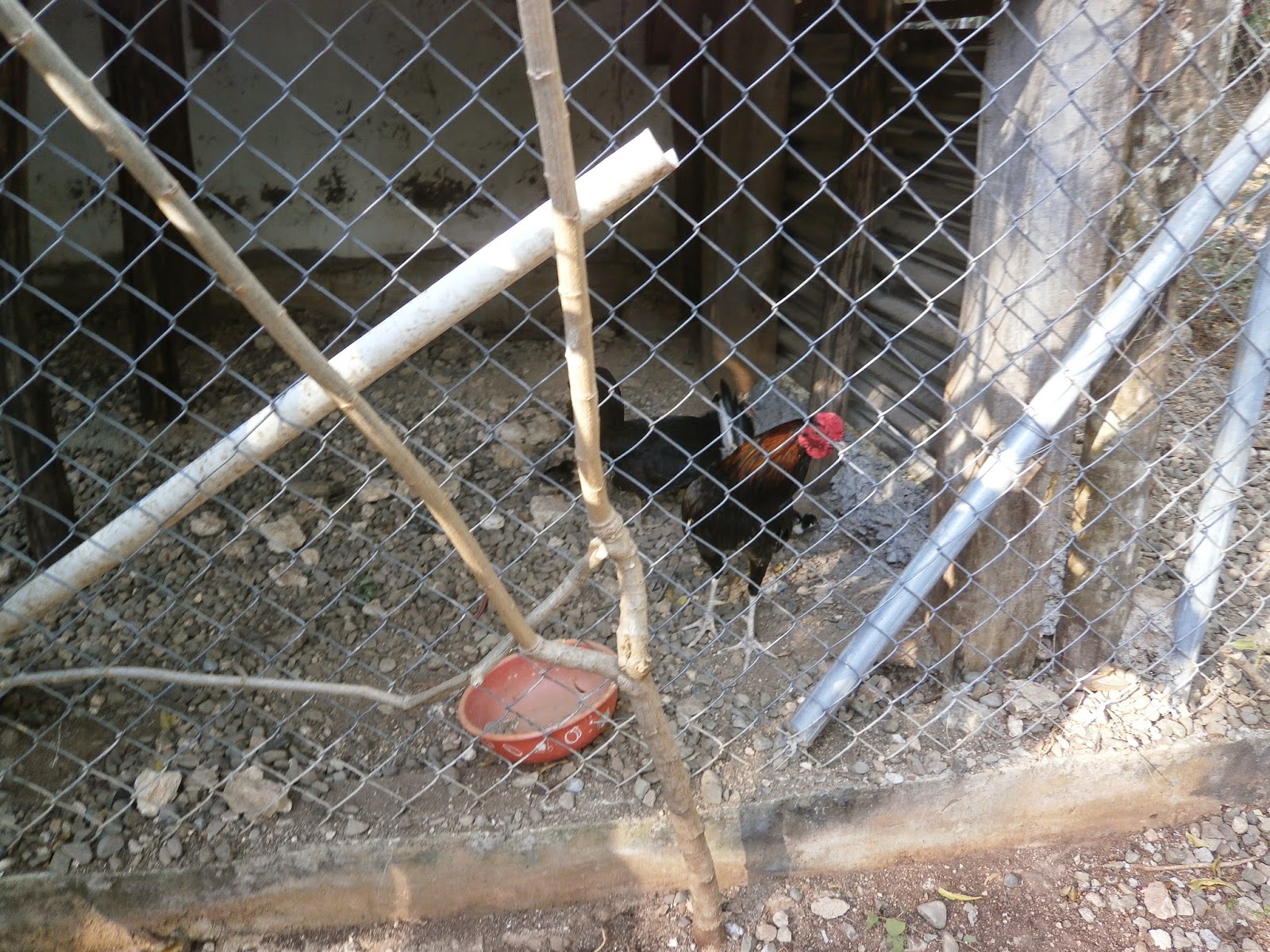 Meanwhile the rest of his women are in the garden together with Monster and Mrs Monster. I thought maybe Mrs Monster would not be interested in him. Not a chance. Once the sanky was in jail she was straight back to canoodling with him and they are romping around together in the bougainvillea. 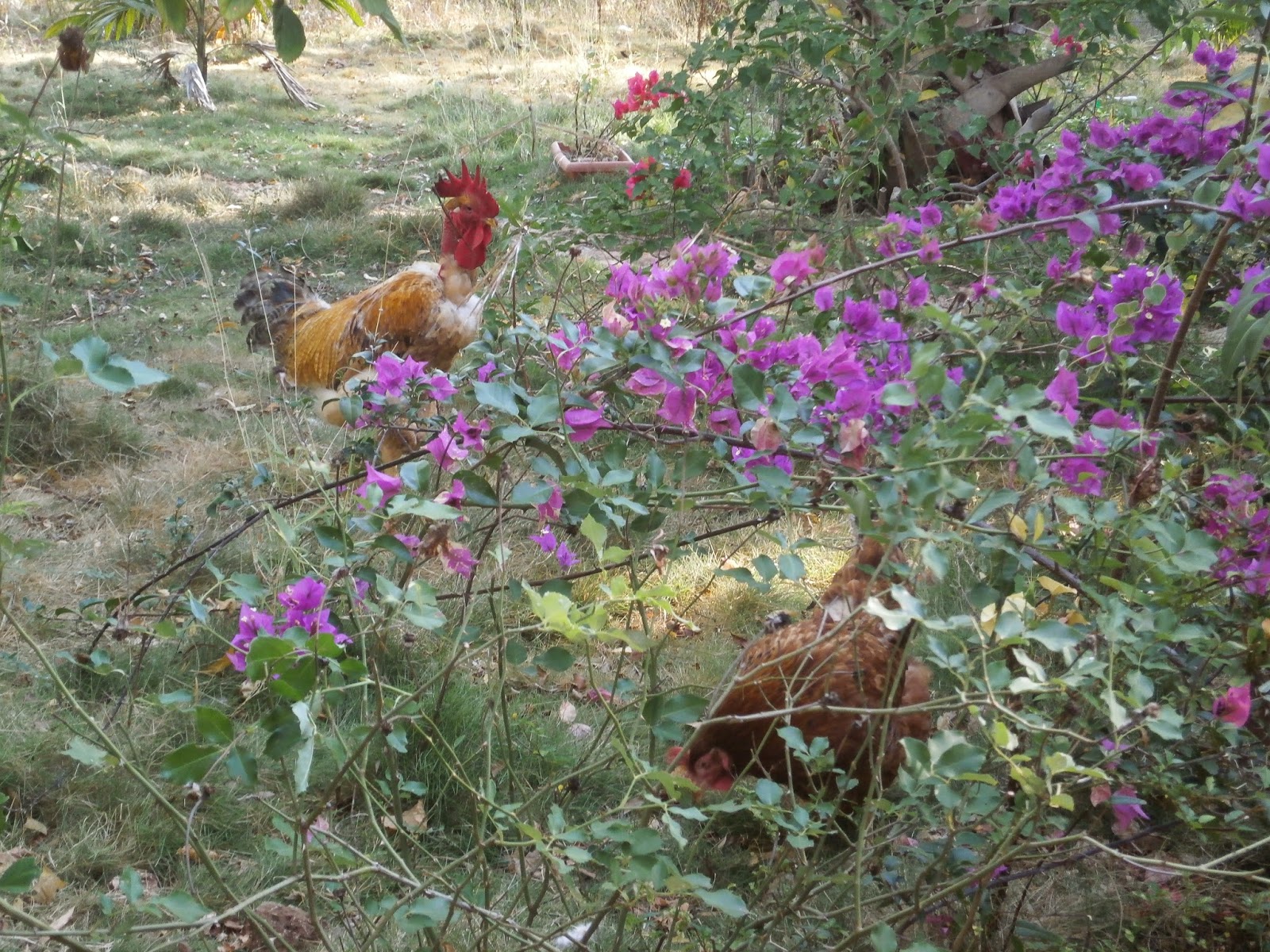 And when night fell I wondered what would happen. Would she go back to the cellar where she was with El Violador, even though he was in jail, or would she return to her husband in the dog crate? 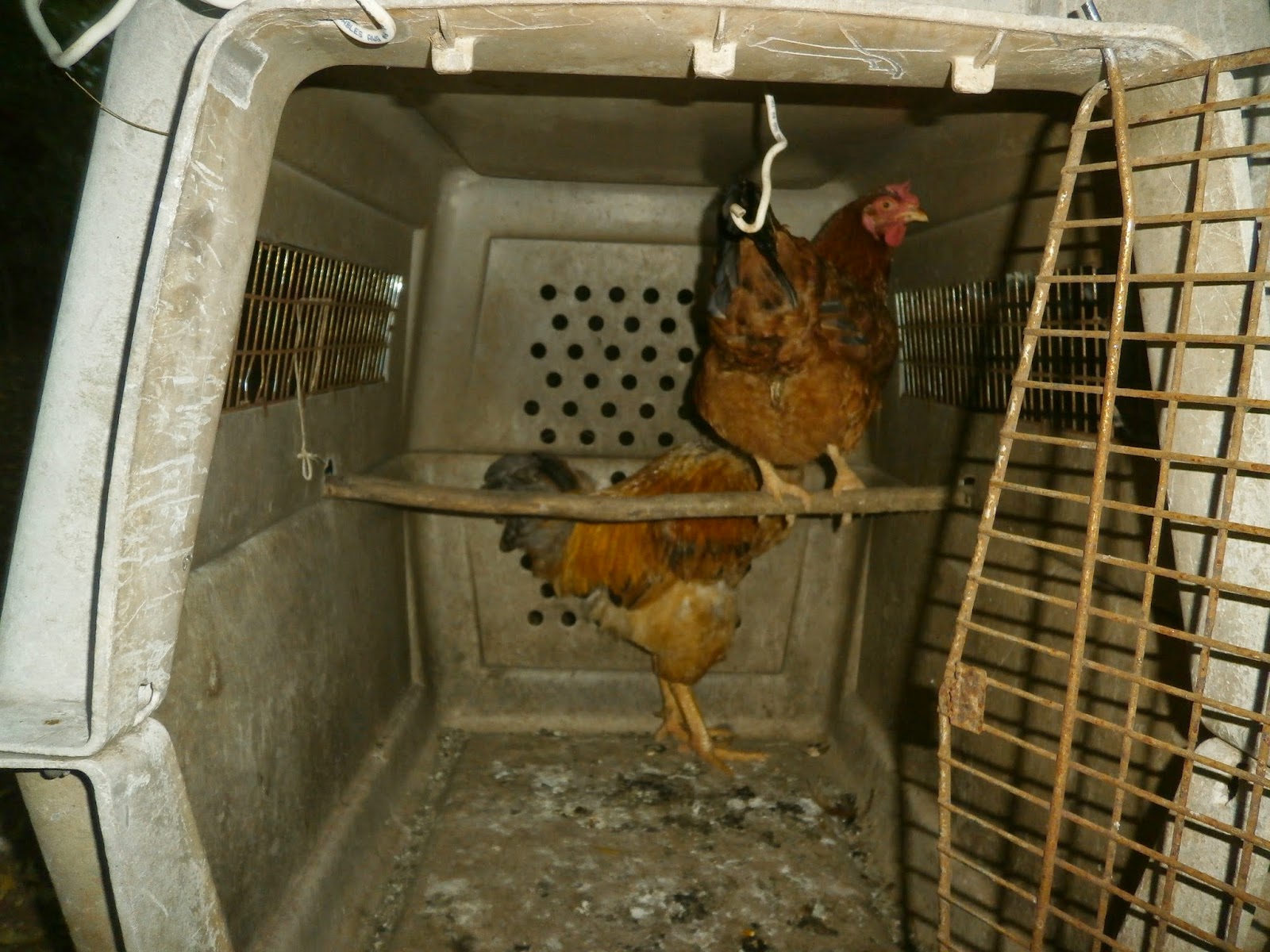 So all is well again in chicken land, and, as the Dominicans say, Monster is as happy as a worm (as they live in earth and eat earth so are always happy as never hungry). 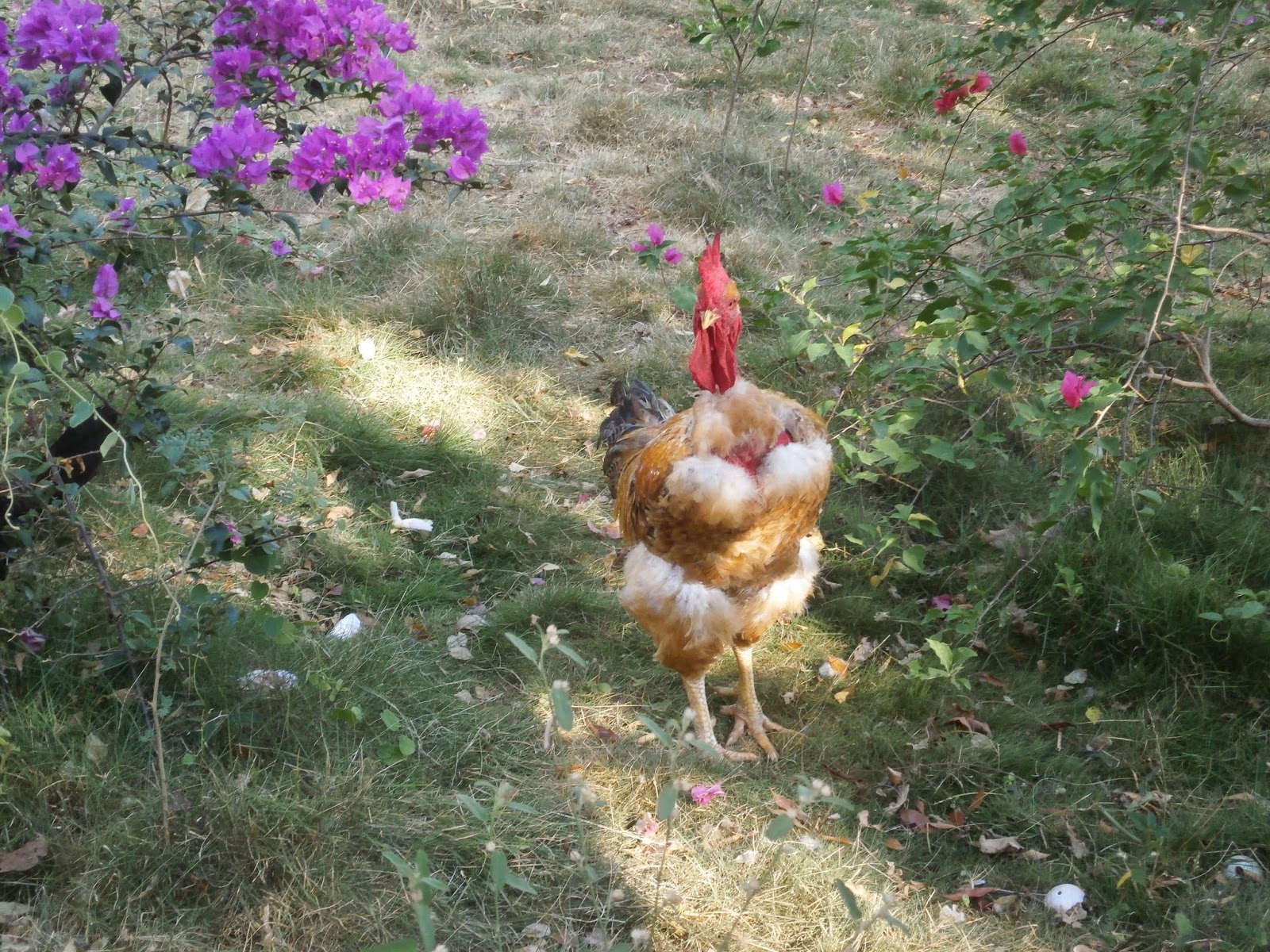 Moving on to matters even more important.

When I was in the capital recently, speaking at the Santo Domingo International Women's Club I met several really interesting ladies. One of these was Diane, who is a doctor and I was talking about the health issues here in the campo where I live. Now I consider myself reasonably informed when it comes to medical matters. I was a Queen's Guide and can tie a triangular bandage with a reef knot at the back for a broken arm. I was a diving instructor so I know that you pee on jellyfish stings and I can do CPR. And of course I have watched ER. But that is about it, so when all of these campo people are asking me for help with their diabetes and other illnesses I am stumped. Diane and her husband have a foundation called Corazon del Siervo:  Serving with the heart in English. She chatted to me about how to help with diabetes with some amazing ideas which are simple and which the local people can do. She also promised to come and do a medical mission here.

She contacted me last week and this Sunday, she and her husband plus four more medical professionals will come here to carry out the mission on Monday. Chivirico will be on hand to help of course as being a doctor is on his list of preferred occupations when he grows up along with fireman and President of the country. 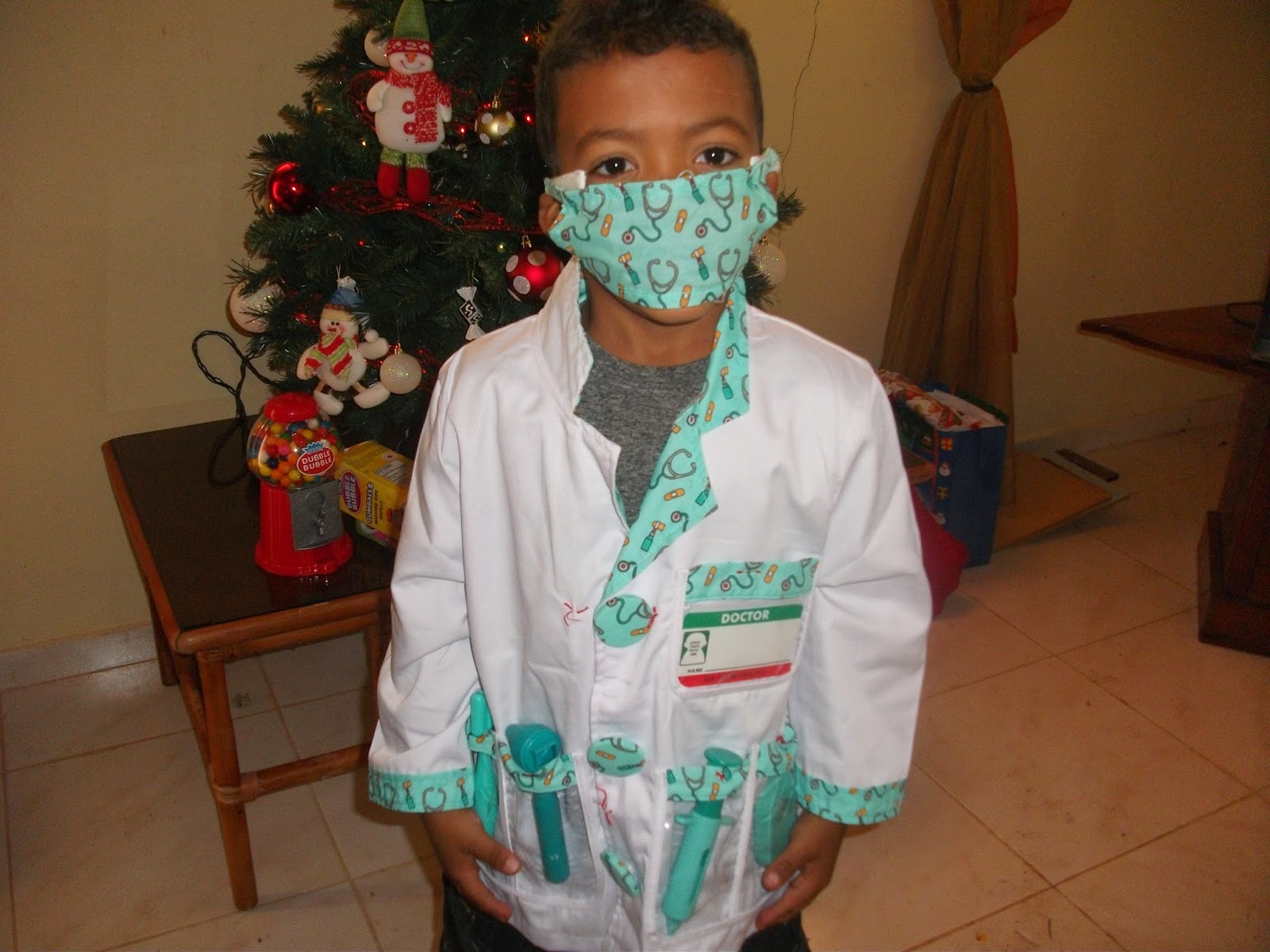 There is only one tiny snag.

I thought there would be around 20 people interested, but word got around and we now have well over 100 coming to see them, and they have all put in requests for the medicines they need. I don't think there is one person in the whole campo who is not taking pills for something. It is going to end up being very expensive so if anyone would like to donate by clicking on their website here  it would be much appreciated.

I will report back as to how the day goes.
Posted by Lindsay at 9:38 AM 4 comments:

A sad tale of infidelity in the Dominican Republic

You remember Mr and Mrs Monster, the chickens who now live free in the back garden? 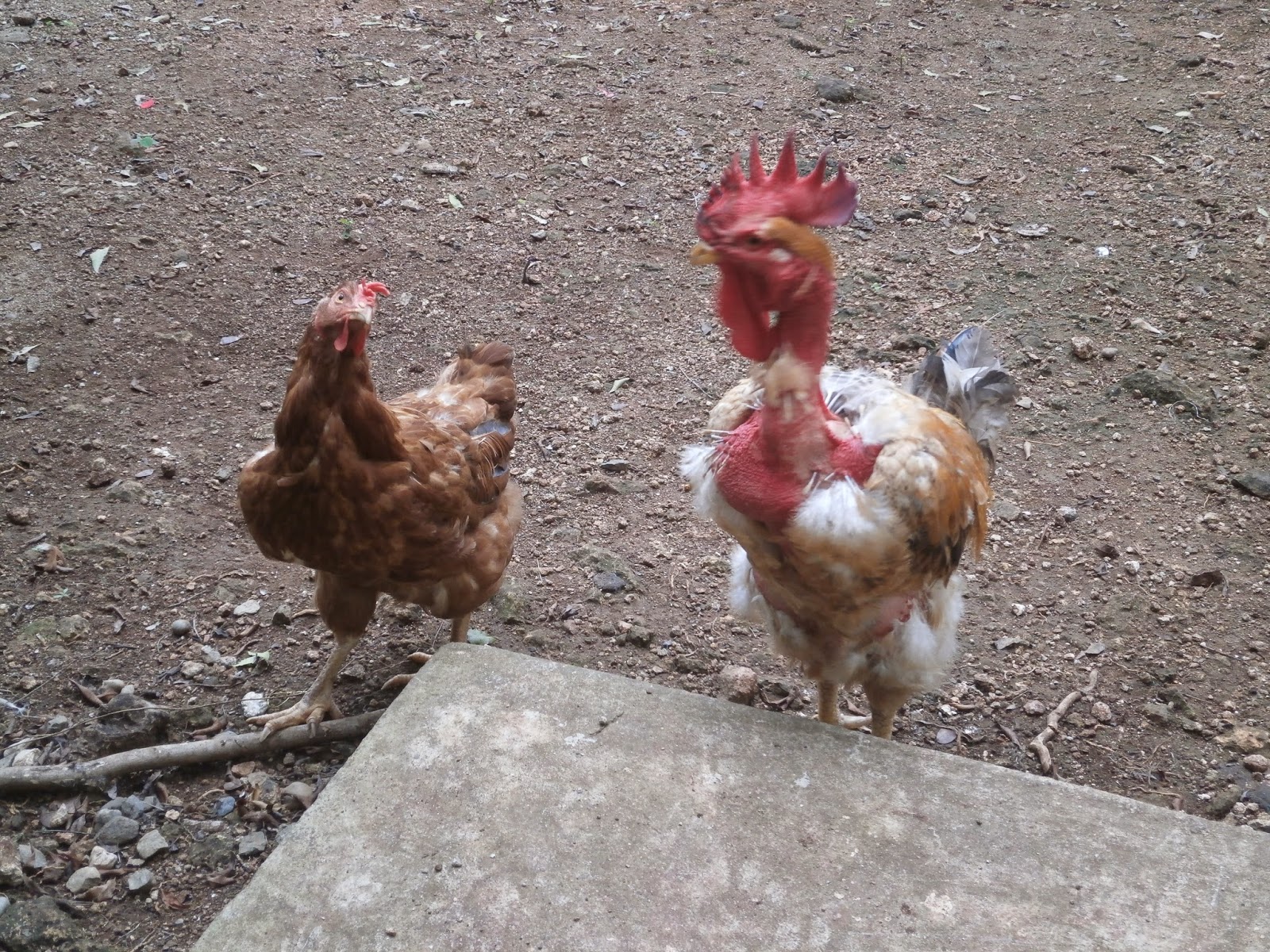 Well, things were becoming a little difficult. Firstly the two of them took up residence on the steps leading down from the house. If the door was open they just walked in, much to the annoyance of the dogs. They also blocked the Dominican cat flap (hole in wall) so the cats couldn't get in or out. They asked for food constantly - celery or lettuce or bread, and if you didn't give it to them and shut the door so they could not get in, they just pecked at the door, which is glass and I was sure they would break it. 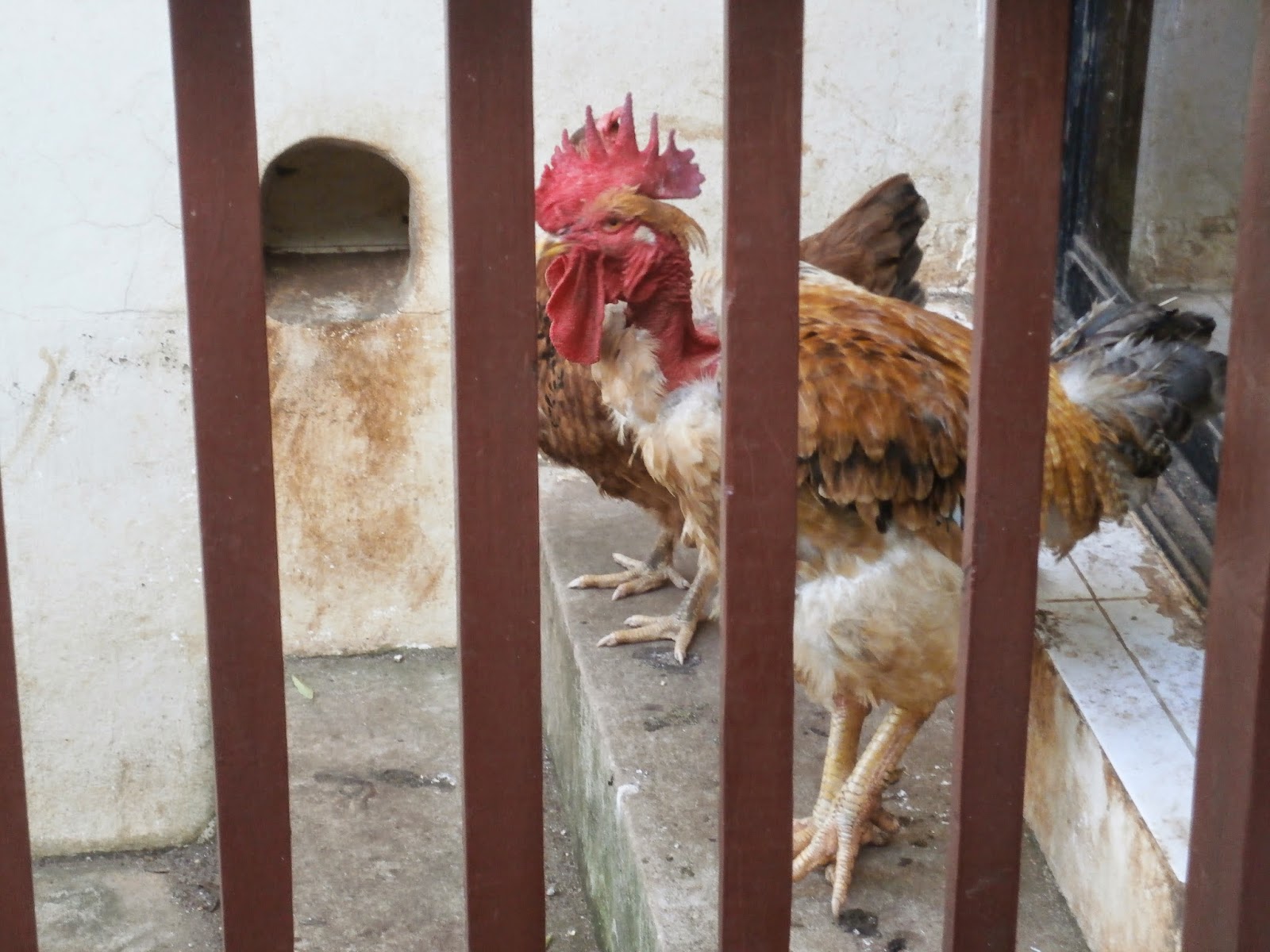 Secondly the neighbour's beautiful and big cockerel together with his tribe of seven hens were constantly in the back garden, and Monster was terrified of him and kept running off into the woods.

Plus there was another issue. Chivirico was here for Easter week, and we couldn't find Mrs Monster anywhere. Eventually he found here sitting down in the land next door, and look what she was sitting on. 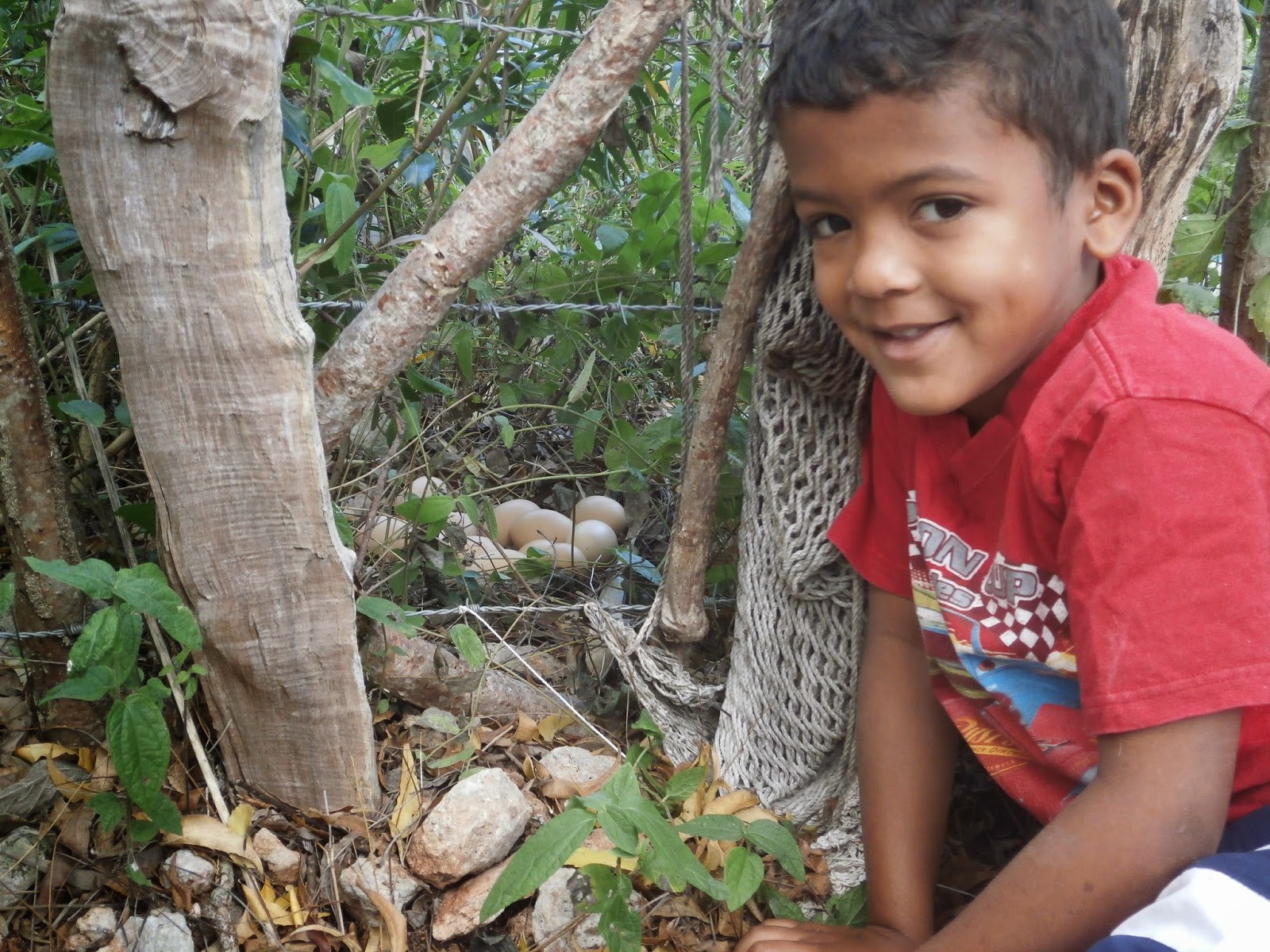 There were 13 eggs. Not quite the chocolate ones for Easter Sunday but it was lovely to see them there. 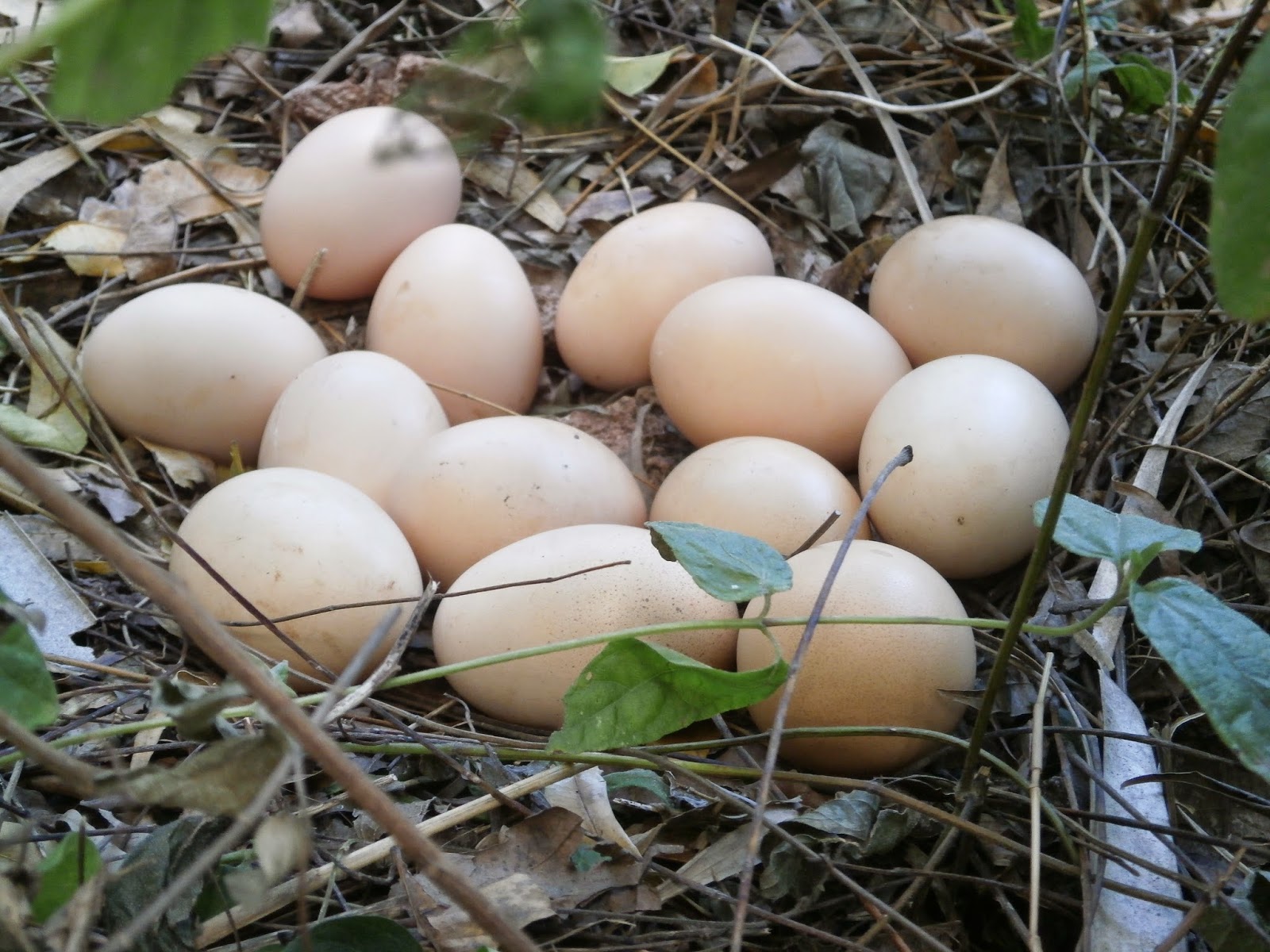 So we were concerned about the eggs and it was decided to put Mr and Mrs Monster under the balcony which is all fenced in, and very large. We moved the eggs and their nest in there too. They were not happy at all to be in there. In the meantime, Danilo moved another cockerel and his harem of three hens into the back garden so that they could be free and also apparently this cockerel would stand up to the neighbour's cockerel to stop him coming into the garden.

His name is El Violador, the rapist, as he bonks anything with feathers. 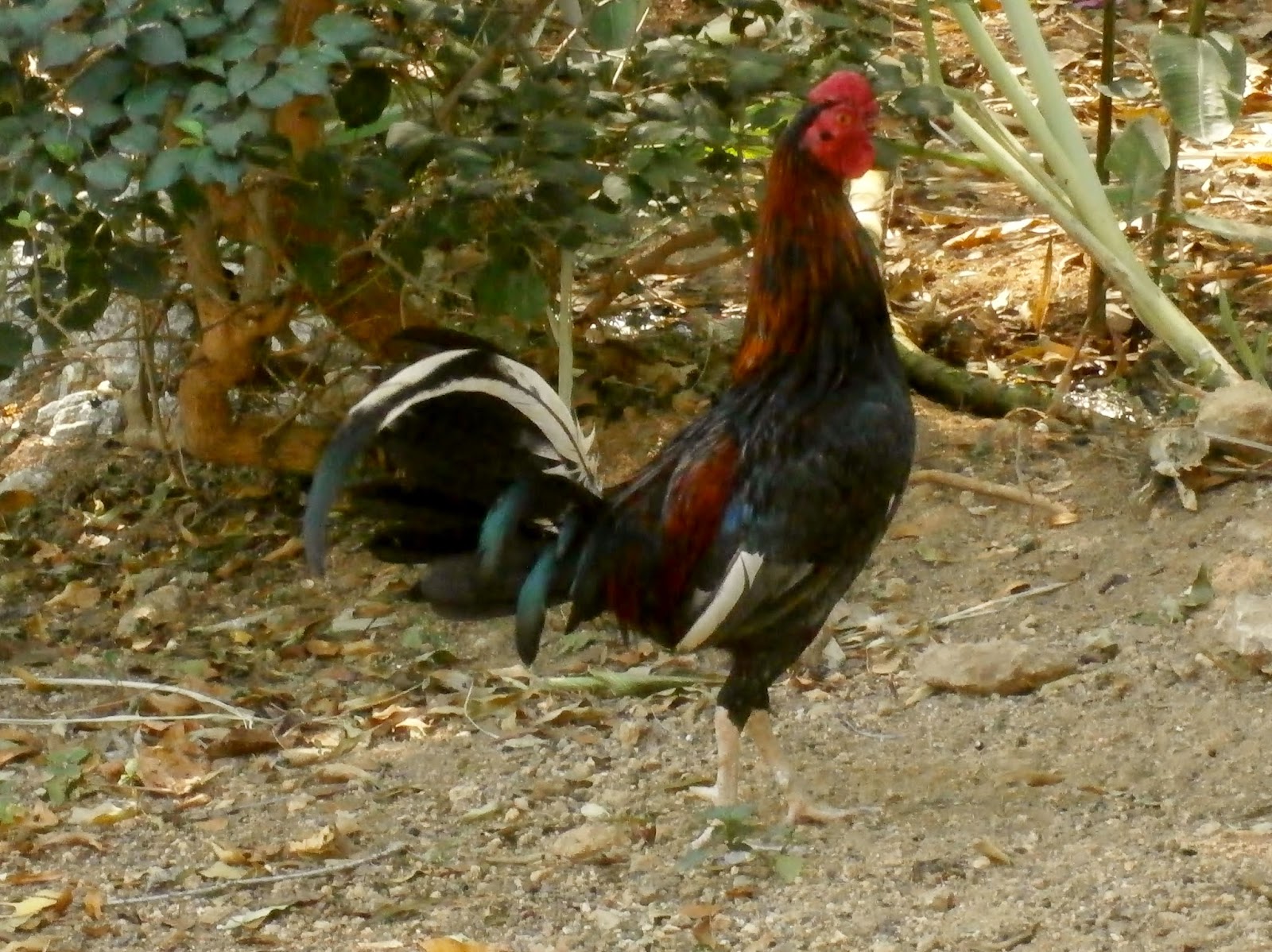 There was no sign of the neighbour's cockerel again and Danilo was congratulating himself, until I discovered that on the day that El Violador had been set free, the neighbours had cooked their cockerel for lunch.

As Monster and Mrs Monster were obviously not happy under the balcony, we let them out again. El Violador was not impressed and Monster did a runner every time he saw him too close. He was terrified of him. At night, Monster and his wife went off to bed in a very large dog crate and the Rapist and his harem went to sleep in the cellar.

All was calm. In the day Mrs Monster was within a foot of her husband or sitting on her eggs while he kept watch. As the sun went down everyone went to their respective beds. Until last night. Mrs Monster left Monster and has moved in with El Violador in the cellar.  Monster slept alone in his crate and she slept with her new man just a few yards away. Danilo says that she has gone with the stronger rooster even though she is pregnant with Monsters chicks - well she has the eggs.

I feel heartbroken for Monster. He stands alone at one side of the garden, watching her strutting around with her new man. 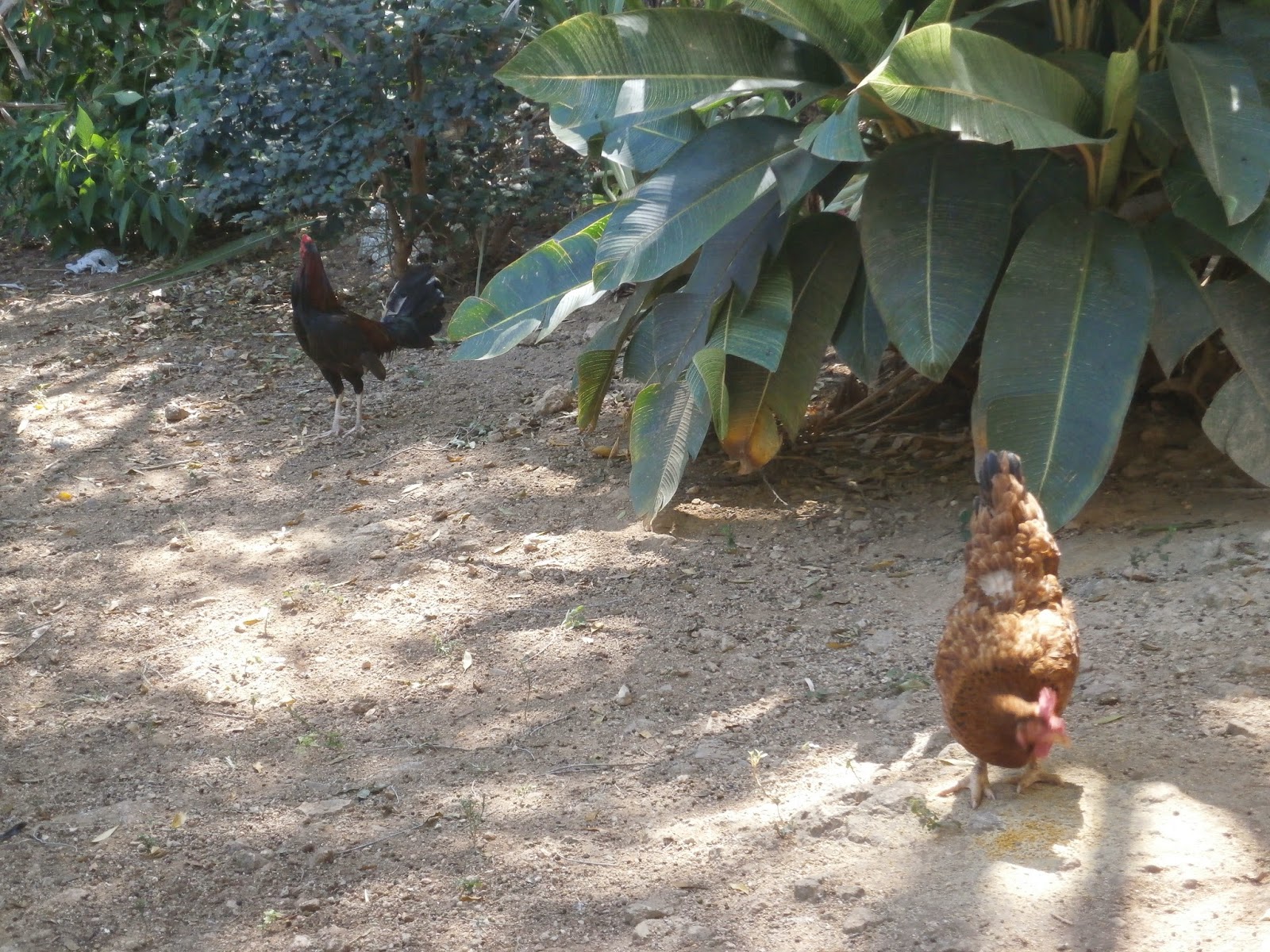 He has taken up his position behind the barbecue which is around 60 yards away from his now ex wife. 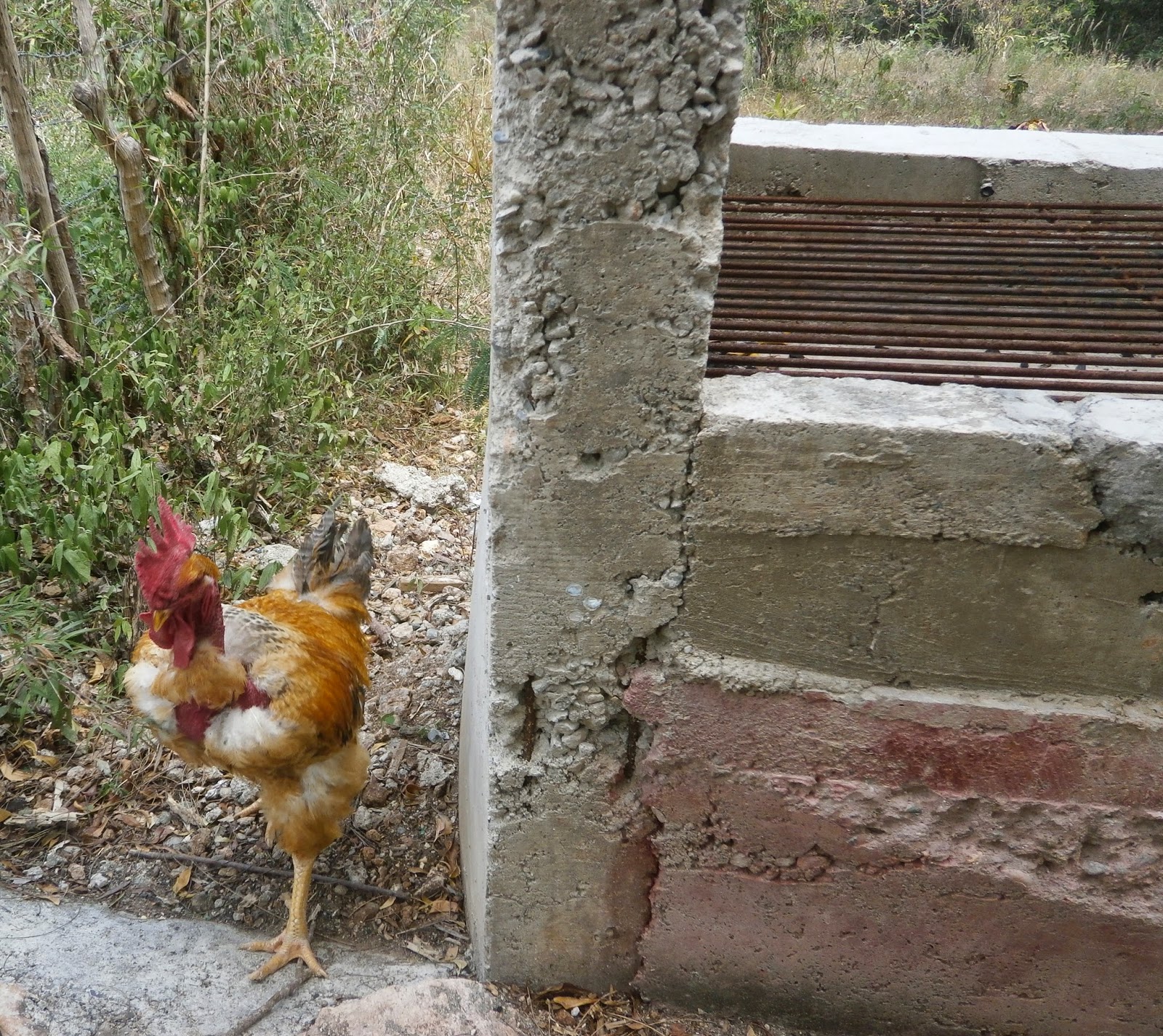 And watches over his children waiting for them to hatch. 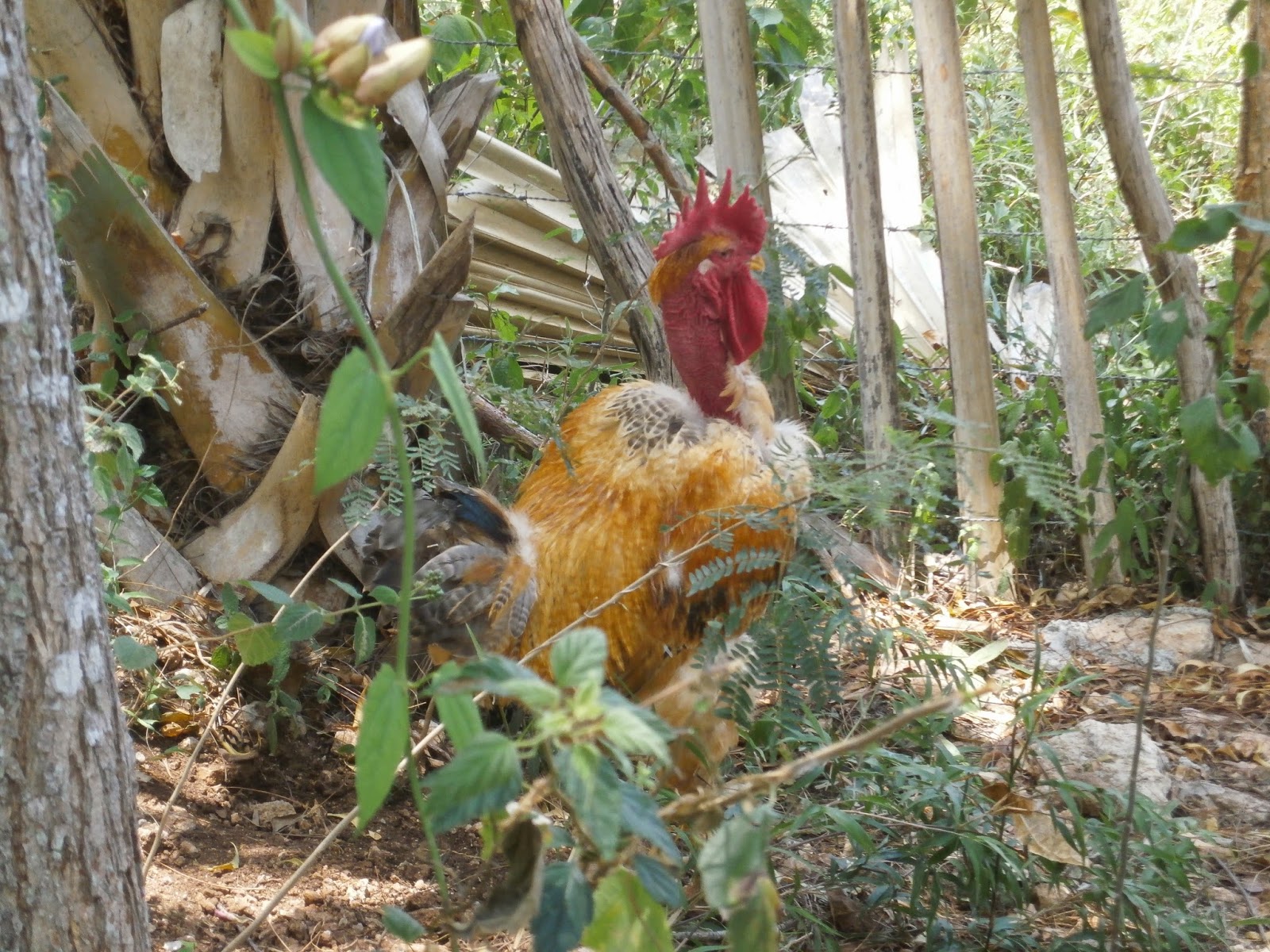 I cannot believe she has done this. They have been together for two years, spent all day every day together, slept together every night,  13 babies on the way, and she has run off with another rooster right under his nose.
Posted by Lindsay at 2:25 PM 7 comments: