Another busy month. November is the month of birthdays. Mine is on the 19th and Danilo's on the 24th. For the last few years we have done nothing on our birthdays, in fact we have also been known to totally forget them! However, this year the date, 19th November was in the diary as Danilo was due in court in Puerto Plata on the north coast, for the murder trial. I also had to go to act as interpreter for the client.  At the last hearing the judge ruled that as the client did not have a Dominican identity card, she obviously couldn't speak Spanish. Conversely those that have a DR identity card, cedula, obviously can speak Spanish. There is zero logic in this, but hey ho, I was the appointed interpreter.

So we set off at 5 am, and made it to Puerto Plata with no hiccups. All hearings are given the same time to appear, which is 9am, and you check the list outside the courtroom to see what number you are on the list, to give you some idea what time you will go in. We weren't on the list. On checking, Danilo discovered that they had rescheduled and not told us. The hearing was now moved to December 10. Obviously it was more than a little annoying, but I couldn't be too cross, as the client had brought me mushrooms as a birthday present, and her friend bought me a massive bottle of rum.

Danilo had to wait for some paperwork, so I took the opportunity to go over the road to Jumbo international supermarket, and spend the birthday money mum had sent me.  On entering, my brain injury came to the fore as I was completely overwhelmed, and had no idea what to do, standing in the middle of the shop, trying to work out what to do. Eventually I sorted myself out, and within no time at all I was in paradise. Real steak (to go with the mushrooms), baking potatoes, dips, pitta bread, real cheese, real bread. In addition, I met a lady there who had brought me horseradish, bisto and spices from England. And to top it all, on the way back home, we stopped at Maimon, and Danilo bought me a fish for my birthday!


The next few days he was away, working on more cases so I stuffed my face with baked potatoes, slathered in real butter and horseradish, rare steak and cream pepper sauce, and a pile of mushrooms. Pure heaven and a total change from mashed plantains and a tin of sardines. 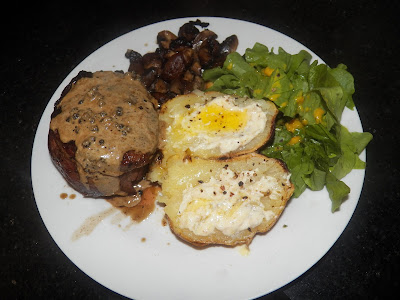 As you know, we have no car, not had for a year or so, but stepson number 2, Alberto has one, so we borrow that when we need to go off on legal work, and usually stepson 1, Dany drives. This is what we went to Puerto Plata in. I sit in the back, naturally, but it is very uncomfortable as someone wanted to make the car higher off the ground, so it didn't hit the speed bumps, and took out the shock absorbers I think. Anyway, the end effect is you bounce all over the place sitting in the back which makes for a very uncomfortable ride. Add to that the radio blaring at full volume - at least it is the news and not terrible music, telephones pinging every two minutes ,and the usual scary Dominican driving, overall it is not an experience I enjoy at all.

Danilo was due to leave to go to Santo Domingo a couple of weeks ago, at night, and Alberto was on the way to pick him up, when he hit a cow. The cow bounced onto the bonnet, hit the windscreen, slid over the roof, bounced off the boot and fell off. It sat dazed for a while then got up and ran off. The car is damaged but driveable, although the windscreen is cracked. The journey was delayed while Danilo went to where the car was and the search began for the owner of the cow, who legally, has to pay for the damage to the car. He was eventually spotted and hauled to the police station, along with the cow, to discuss the settlement.

Then this week, we had another court case to go to, and once again I was the interpreter. This one was in Gaspar Hernandez, even further away,  on roads which were even bouncier. We had planned to leave at 5am but Dany arrived early in the car, as we had to go and pick up Alberto's father in law and take him to the bus stop to go to Santiago as he had hurt his leg. On the way to pick him up we had a puncture and had to change the tyre, so it was all a tad stressful until we got well on our way. Dany uses Google maps and listens to the instructions, so it is now much easier not to get lost.

We arrived at the court house well before 9, and sat outside on the ubiquitous plastic chairs until eventually our turn came at around noon. Danilo was the lawyer for the victim, and I was translating for the victim, but the defense lawyer asked for me to be removed, as how did he know I was translating properly. Danilo said it was because he didnt want the victim to know what was being said! Anyway, the judge disagreed with him, so I stayed, and stayed and stayed. The supposedly 10 minute hearing went on for over an hour, and at last it was over, and once again the case went in our favour. Danilo hasn't lost a hearing yet.

He was then off to Santo Domingo again,it was agreed to drop me off in Santiago, from where I could get two buses home. This time, he said he knew how to use Google maps and he could set it up rather than Dany. We needed to get to what we call the rotunda  in Santiago, which means roundabout. It is where the buses for Mao leave from, and there used to be a roundabout there, many years ago, but it is now traffic lights. For some reason we seemed to end up going around and around Santiago, until we realised that Danilo had put in the location as rotunda and nothing else, so Google was sending us to every roundabout there was. Hey ho. Eventually I made it home.

And finally, I have read three great memoirs this month. All about Africa and all by the same author, Val Poore. I really recommend these, she has a great writing style and I had no idea Africa was the same as the DR in so many ways. Shouting not speaking, friendly and helpful people, issues with water and electricity. Excellent books, and it has increased my knowledge of South Africa by loads.
They are all available on Amazon and would make a great Christmas present!