Apologies for the delay - I can't use the excuse I have been very busy, but have just been pottering and the time seems to disappear.

I was invited to speak at a conference by Live and Invest Overseas which meant going to Santo Domingo, and I also wanted to do a book signing there and I wanted to see friends of mine, Grace and Nany who were to the west of Santo Domingo for a couple of months. I really don't like going to the capital but needs must and I could kill three birds with one stone. So off I went on the bus as normal. The book signing was not very well attended but it was great to see a couple whose wedding I sorted out years before in Juan Dolio, plus my Dominican friend Olga and I did sell a few books.

The following day it was off to the conference, then the bus to Grace and Nany's and the following day they brought me home in their car laden down with goodies for us and baseball gear for the team Chivirico and Albert play for in Esperanza. They had collected loads of gear and shipped it to the DR and had been donating it to teams of kids around the country. 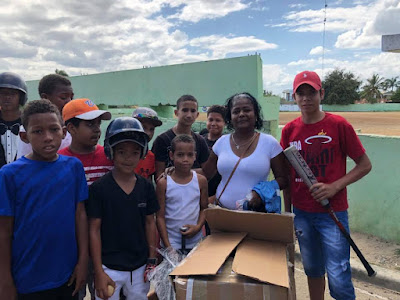 They made hundreds of children around the DR very happy.

While I was away I had been asking Danilo how Zelda, the new dog, was, as although she was fine with me she was not quite as comfortable with Danilo. I had been told she needed socializing - whatever that meant, and every time we had a visitor, she would shake nervously and not leave my side. 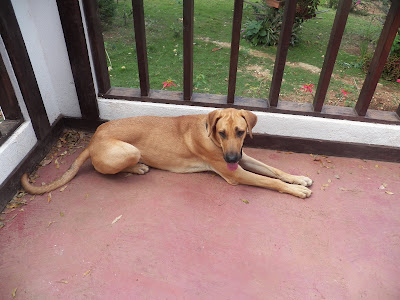 We messaged on Whatsapp daily, and I would ask how is Baby Girl, which is what I called her, and never had a reply, so I had a horrid sinking feeling. But when we drove into the front yard, Nany, Grace and I, there she was running around ..... and she saw the car, ran towards the 8 foot wall around the yard, and sailed over it. I have never seen anything like it.

Danilo then explained that every time someone arrived - and when I am away he is never alone, as the family always visits - Baby Girl had left for the land next door. He had then left the front gate open and waited for her to return, which she always did when everyone had left or was asleep. She refused to come in the house, so he fed her outside and went to bed, and when he got up in the morning she was asleep on the couch and would then leave again for her little spot in the next door field.

Once I returned we were back to normal and she sat near me in my office. 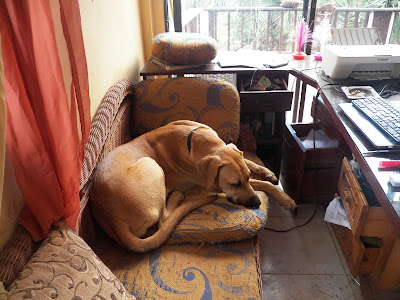 But last week, I told Danilo to close the front door of the house as the dustbin men (garbage men) come early on a Friday morning and they open the gate, drive in, collected the rubbish and drive out, so I don't want the dogs outside when they arrive.

I woke up early, around 6.30 to hear a commotion outside and the dustbin men yelling about a flying dog. Danilo had closed the front door but Baby Girl was outside and refused to come in, so he closed the door but opened a window, which was only five feet above the ground, so easy for her to jump through!  However, she spent the night outside but when the dustbin cart drove in - off she went and flew over the wall. I got up and as soon as they left she was sitting at the front gate waiting to come in. Now the whole village is talking about the flying dog. Nothing can keep her in. If I go to feed the goats she flies off the balcony to come with me - and comes straight back with me with no problem. If I am not around and she leaves, she never goes far, just to her little spot in the next door field and as soon as I return then so does she.

Meanwhile we have a new member of the family in the shape of a carrao or limpkin. 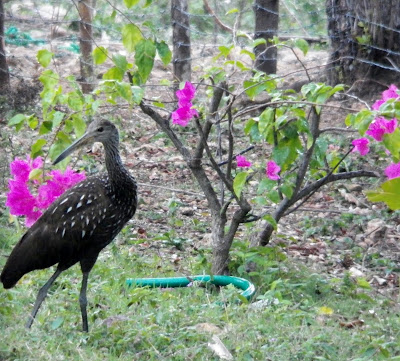 Mr and Mrs Limpkin have moved in which is fine apart from the noise they make at dusk and half the night, and we also have a pair of todies nesting in a little tunnel under a tree trunk next to the geese. 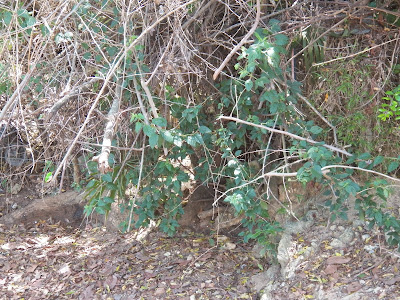 Can you see one of them on the left of the picture, sitting on a branch a bit more than half way down?

How about if I enlarge it? 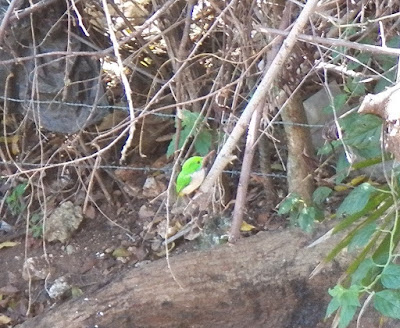 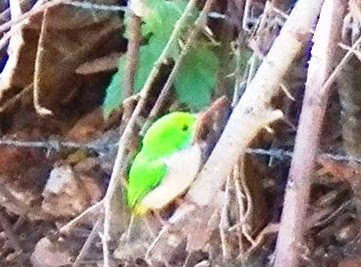 And this is a professional picture (not mine!). 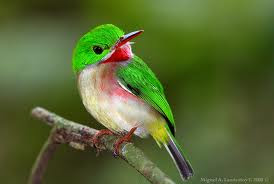 They are so cute but hard to see as very tiny - around the size of a wren if not smaller. I can't wait to see the babies. I spend ages waiting with camera poised but so far haven't managed a really good shot. I am definitely becoming a twitcher!