Most of the time I love living in the barrio but the last couple of weeks have not been so good.
There is a woman who lives a couple of doors down, looks to be aged around 60 but could be only 40, with a very annoying high pitched voice. She has a grandson called Pedrito and she screams for him constantly as never seems to know where he is and can’t be bothered going to look for him. This starts at 5 in the morning usually. She is the one who broke into the water supply so that she could get water to her house, put the tap in front of our gate, and now the street constantly floods as the taypee she used to stick the pipes together keeps falling off. 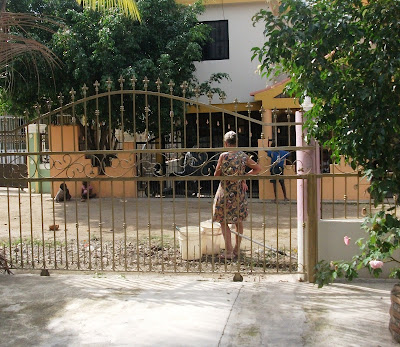 Our landlady, on seeing the state of the street told her to fix it or she would take the pipes away. Not my fault at all, as I didn't say a word, but it seemed to send this woman into some sort of evil revenge mode.
She decided that our house was a public health hazard because the dog poo smelled. Well there's a surprise. I have three dogs, and one, Silly Boy, a blind old rescued English Mastiff does do some pretty impressive poos.


However, they are all scooped up at least twice a day, sealed in plastic bags and disposed off, and the concrete patio washed down with bleach. The fact that there are around 20 to 30 street dogs pooing and peeing in the street with kids running up and down barefoot does not appear to concern her. Nor does the face her grandson, Pedrito is always in our supposedly unsanitary house and garden eating and using the internet.
She has taken to calling the Public Health department to complain about Silly Boys poo. They have done nothing, not surprisingly really.


A couple of weeks ago, one of my dogs, Belinda the Great Dane puppy became very sick. I won’t go into details in case you are eating, but it was very messy for 5 days. The vet diagnosed probable poisoning but luckily we managed to save her with intense nursing, expensive medicines and sleepless nights. She is now fine thank goodness.
A few days later, a man came to video the house on the instructions of the owner as the house is for sale and he wants a video made to show to potential buyers in Nuevo Yol (New York) and she thought he was from the Public Health department. On finding out he wasn't she went into a total banshee screaming rage and the next day 3 of my cats were poisoned and died.


No proof it was her of course.
I really do not understand what her problem is, but other neighbours have said she is jealous and I must admit I have seen this type of behaviour before where a few Dominicans have been jealous and do the most nasty things to the people they are jealous of.
Hopefully we will move shortly before I run out of animals for her to poison, and in the meantime the next time she passes me in the street and calls me “Mi amoy” (should be mi amor but she has a strong accent) I will punch her in the face. Well, I probably won’t but I will feel like it.

The washing machine also died this week and had to be taken off to hospital. 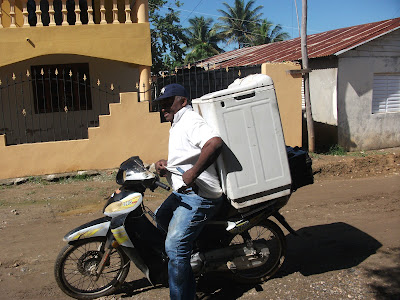 Luckily I had a replacement - my husband and Chivirico and they did all the washing by hand! The washing machine returned supposedly all fixed but minus the drain hose so now when you empty the water it goes all over the floor. Hey Ho. 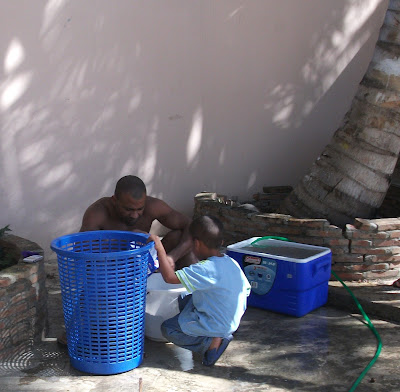 On a brighter note I am off camping in my favourite part of the country, the south west this weekend so I should have some interesting tales for the next post. Also the blog is on a new site where you can vote for your favourite blog and leave a comment. The site is called expatsblog and you can find it here. If you have a chance do check out the other Dominican Republic blogs as there are some great ones there, and if you want to vote for this one and leave a comment, that would be very nice too!

Email ThisBlogThis!Share to TwitterShare to FacebookShare to Pinterest
Labels: Barrio Life, Cats and dogs and other animals, chivirico, Dominican culture