I know, late again but I have been very busy, and have so much to tell you so I will have to do it over a few blogs.

Having returned from Sosúa it was straight back to work and normal life – translating, writing, cooking, cleaning and daily colmado trips.

Then, and I will not go into the full gory details, but someone/something  poisoned the dogs and over the course of a week, despite our best efforts with rehydration, antibiotics, anti virals, anti poison, three of them died. Grita Mucho and her brother Sweepy and Rin Tin Tin.

I cannot tell you what sort of a week it was, with one minute hope they were recovering and then despair as one by one they died. Danilo and I spent all week injecting, cleaning up, praying. The puppy, Canguru was in the same condition and was basically unconscious so she was next on the list to depart this world, but by some miracle, one day she got up, walked into the kitchen and demanded food – from that moment on she was on the mend.


So now we are left with Lobo, the husky, Canguru his daughter who is now around 6 months old and faithful old Meg.

But something had to be done, so we decided to build a wall between us and the neighbours. Not just any old wall but a 12 foot high wall. This would also mean that the dogs could not see all the roosters in their cages, nor the cows, nor the horse, so they would bark less, the chickens from neighbours would be less likely to fly into our garden where there was a good chance they would meet a sticky end, and we could let the dogs into the front garden with no fear of escape.

Part one was to take down the wooden stick fence and dig footings, fill them with concrete and metal bars. 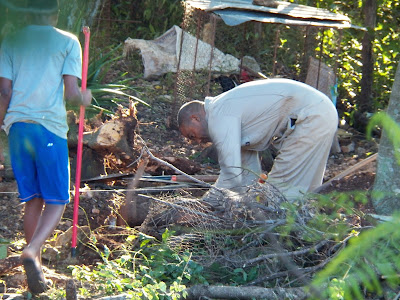 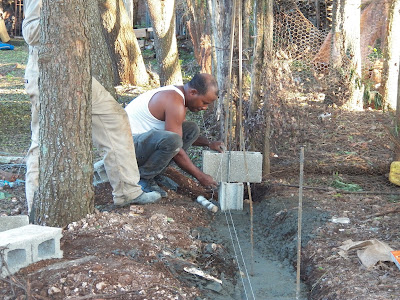 The actual building of the wall is being done by Danilo, number one dwendy Saya (the block layer), stepson Dany (who says he knows how to lay blocks and you don’t need a spirit level – his is the wobbly bit), and help from Albert and Chivirico. 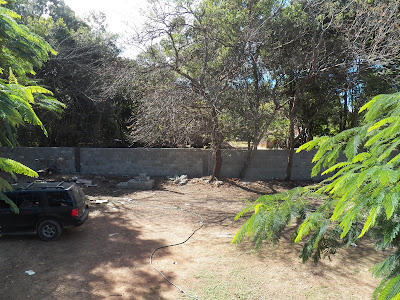 So far we have built the  whole of the back part, now there are just the sides to go. It is not a cheap project as each block is RD$26 which is around 50 pence or 60 cents and you need an awful lot of them plus cement, gravel, sand and metal bars. Still the cat likes her new bed. 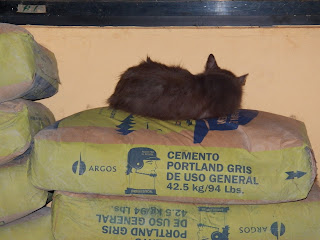 All good fun, and I can’t wait for it to be finished, painted and then nice tropical plants in front of it.

Email ThisBlogThis!Share to TwitterShare to FacebookShare to Pinterest
Labels: campo life, Cats and dogs and other animals, Dominican workmanship