Sorry for the delay

I know it has been months since I blogged, but really it isn't my fault. It is the fault of my brain! I am still having issues, and one of them is an inability to concentrate for a long period of time, and I can't multi task. I knew I should blog, but couldn't bring myself to do it, so just kept putting it off. Anyway here is the long awaited update!

First, and most important, I have started writing book 3. It has been a slow process as writing is not coming as easily as it did before, and it is hard to write a memoir when you can't remember what happened! What I am now doing is not forcing it, just writing when I feel like it, and when I remember things, I write about them. This means it is pretty disjointed but I will pull it all together later - hopefully not too much later.

I have just returned from England, where I went as my 87 year old mother had a hip replacement a month or so ago. My sister took the first shift of a couple of weeks, and then I did the second shift, arriving back home in the DR yesterday. It's a long journey, as I have to get to Punta Cana in the east of the island first, which takes a day on 3 buses, then I spent overnight with a friend and then flew out the following day. Next step is to get a train up to near mother's house, where my aunt and uncle came to pick me up. It was lovely to be back in England again, where I ate like a horse, but also had to do the things which mum can't do, like washing dishes, pushing the trolley round the supermarket, washing and ironing. But it was still a lovely time, although my brain did funny things as usual. Mother told me that bottles go in the blue bin, which is the recycling bin (there is a green bin for garden rubbish and food, and a grey bin for everything else). Idiot me put a bottle of wine in the blue bin, which was half full of wine as brain computed bottles  go in blue bin, not bottles go in blue bin WHEN THEY ARE EMPTY. Also we met up with lots of family members at a funeral, and I greeted my cousin by name, no problem, but I called his wife of 30 years by the name of his first wife. Ooops! I still forget words in both languages but a new symptom is that I have also started using totally the wrong word. For example if I need to go to the shop I say "Just popping out to the cheesecake" or something equally daft.

Still, all my mishaps are not life threatening, so fingers crossed things will slowly improve.

The journey back was even longer as I boarded the train at 6.40 am, meaning getting up at the crack of dawn, and 20 minutes into the journey I had a message from British Airways to say the flight had been delayed by 3 hours. Deep joy not. But we were given vouchers for lunch. £5 for sheep class people, which was me, and £10 if you were in higher classes - obviously they have to eat better than the plebs. Given that a bottle of water was £2.50, there was not a lot left for food. Following 6 hours in Gatwick's non-smoking departure lounge we boarded, only to wait for another hour and then the pilot announced the plane was late as they were trying to fix the water - they couldn't and there was none. No tea or coffee and no water in the toilets, which meant the stewardesses handed out bottles of water each time someone used the loos. I did get a message on my phone when we landed saying sorry. So that's all right then.

The big news is that Danilo has been sworn in at the Supreme Court so is now practising as a lawyer. Hooray, at last. He is loving it and has been asked to join a local practice so he is over the moon.

He also is the lawyer for his first case, which is a murder trial and he is prosecuting and loves every minute of it. Here he is about to go into court - not forgetting his pom pom. 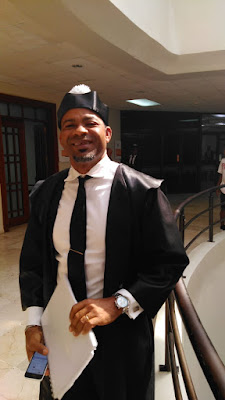 Dogs, cat, chickens are all fine and Grumpy is growing into a beautiful dog. They were delighted to see me on my return last night.


The big event in Cacique was that my friend, la bruja Angela married her husband ( well they have lived together for 30 odd years but like most Dominicans they were not married). I was appointed to be official photographer as I am the only person in the village with a camera as opposed to a smart phone. It was a tad stressful as the priest forgot about the wedding so he was nearly an hour late once he was tracked down. He bore a remarkable resemblance to David Ortiz the shot baseball player. The service lasted two hours and people were constantly giving me directions as to where to stand, usually in very intrusive places like right next to the couple as they were getting married. I was literally dragged from place to place by half of the congregation. Here are a few of my (ahem) masterpieces. 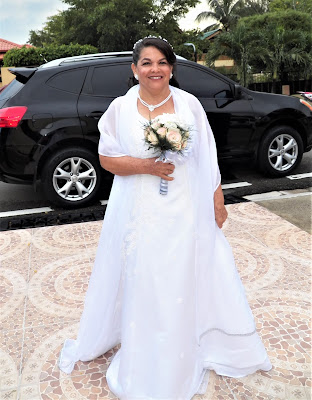 The house is now full of goodies which I brought back from England including cheese, chocolate, Branston pickle, Oxo beef and vegetable stock cubes,  Bisto gravy powder, horseradish and Walkers cheese and onion crisps. And even better, when I arrived home, my friend in the US, Grace, had sent me a massive box of goodies which had been topped up by Canadian friend, Robyn, so there was all of that to unpack as well. Loads of clothes, kitchen utensils, chocolate, tins of real tuna and mushrooms and loads more. I will be feasting for a long time!

Think you should all be up to date. If I leave it as long last time, please feel free to nag me!
Posted by Lindsay at 12:13 PM

Email ThisBlogThis!Share to TwitterShare to FacebookShare to Pinterest
Labels: Cats and dogs and other animals, Family life