H is for Hambre and Habichuelas con Dulce

Letter H in the A to Z of the Dominican Republic series and  I couldn't decide between these two, so decided to write about both of them. 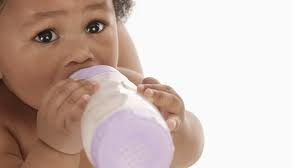 Hambre means hunger, and when I used to think of people being hungry, I thought of Africa and deserts, millions of people with no food or water anywhere, not a Caribbean island rich in agriculture, fruit and vegetables, coffee and cocoa, meat and fish. I could bore you with figures from the World Health Organisation, UNICEF, the UN and a whole host more, but suffice it to say that  in the Dominican Republic 29% of people are below the poverty line and the same number again just above it.  The problem starts at birth, as breast feeding is not the norm. Some say due to culture, some that the women think it will destroy their figures, some that they need to be seen to buy formula as it shows they are rich and only the poor breast feed. Formula is expensive and needs to be mixed with clean water. Many use well water to mix it, some use flour and water so it looks like formula, and other such concoctions. The children are not starving, but they are hungry and malnourished. From 1940 to 1989 UNICEF states that 265,000 Dominican children died of malnutrition. The problem continues through life. It is not that there is no food, it is that it is expensive compared to the income levels. More than 2 million Dominicans live on less than US$2 a day - that is for everything not just for food. And a significant percentage have only a little more than that. The main meal is eaten at noon, and is usually rice and beans and a small amount of meat. No green vegetables, occasionally a little salad. And very little real nourishment. This is the way of life for most of the population, and has an effect on the cultural differences when someone who has never suffered from hunger marries a Dominican who has. 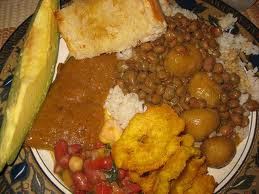 I am used to shopping for at least a week at a time, which is what I did when I was first with my husband and his kids. Big mistake, as the kids would eat everything  on the day I brought it home from the supermarket. Investigation revealed that they believe that if there is food there you eat it as you do not know when there will be food again. I would buy a pack of 6 oranges - gone in 10 minutes. Another slightly annoying habit is to eat all the peanut butter, or whatever and then leave the jar in the fridge so it looks like it has not been eaten.  They would always leave a tiny amount behind though! Juice cartons with a centimetre of juice left in them, the same for the milk, and the chocolate wrapper beautifully arranged to hide the fact that there was only one square left. They found it impossible to eat one biscuit from a packet, one toffee from a box, they all had to be eaten straight away. And given that they had never eaten vegetables it was very hard to make them start and to educate them on the benefit of vitamins.

The food issues spread through all events. At weddings or dinners you eat at the very end of the event, as if you eat early then people will leave as soon as they have eaten, so you must always remember to eat before you go out or spend all evening very hungry or very drunk as the drink flows and on an empty stomach it is not wise. Speeches are before the food not afterwards and I have been to upmarket dinners where the event started at 7pm and we eventually ate at around 11pm

I have no idea what the solution is, and there are several discussions and meetings happening at high levels on a daily basis to try and solve the malnutrition and hunger issues here. But how can it be that in a country so rich in food from the land and the sea, so many people are hungry? 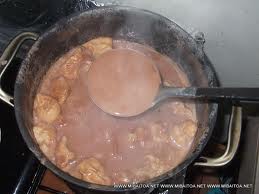 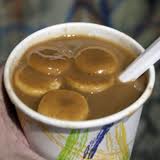 Moving on to a happier topic - habichuelas con dulce - sweet beans literally. This is a famous sort of thick, sweet bean soup or drink which everyone eats at Easter time. it seems that everywhere you look someone is slurping it. If you don't cook it yourself then you will not be short of it as every neighbour will bring you a plastic cup of theirs. Personally it is not really my cup of tea, but I have never found a Dominican who does not love it. It is made of beans, raisins, sugar, coconut milk, evaporated milk and sweet potatoes.  Some add cinnamon, some cloves, some all spice, but every family has their own recipe. Many put little rich tea biscuits floating on the top here.  For those who want to give it a try, there is a recipe here.