Thank you everyone for all your kind words and advice for how I should help Lala.

I went to see her every day. Her little wooden house was full, as all her children returned from various parts of the country, and indeed the world, to see her. The men all sat outside on the terrace, and the women all sat inside in the living area. There was rarely anyone in the bedroom with Lala, unless the priest came, when they all crammed into her little bedroom to pray.

When I went into see her she was lying flat, no pillow, so I suggested sitting her up a little so that her chest didn't become congested, and I sat and talked to her and held her hand every time I went. Sometimes she would open her eyes and sometimes squeeze my hand. I tried to exercise her arms and legs and I asked the family to do the same, and talk to her as I was sure she could hear me. I think they thought I was nuts and could hear them muttering about the crazy gringa lady.

I went to see her on Wednesday morning. She was the same. Flat on her back again. I sat and chatted for a while, holding her hand and stroking her hair. One of her sons who had arrived said he had asked a doctor from the local private clinic to come and see her at 4 pm. I went again at two.  Her breathing was fine, her pulse was strong, she was being tube fed, with no signs of dehydration. I told her I would see her again later.

At 4.30 pm I was sitting in my house working on my computer and I heard a dreadful wail, and then more and more and more. Screaming and howling. The street was full of people running to Lala's house. I couldn't believe that she had died, as a couple of hours earlier she was fine.

It appeared the doctor had come. He had given her an injection. No one knew what the injection was for, as no one asked. Dominicans on the whole trust doctors implicitly and never ask what medicines they are being given, nor what injections they are having. Lala's family just let the doctor inject her without knowing what it was. They still don't know. Twenty minutes later she was dead.

Dominicans are brilliantly efficient at death. Within no time at all she was laid in her coffin in what used to be the living room which was cleared of furniture, and the coffin place atop a large block of ice to try and keep it cool. All night long the family stayed up and friends and neighbours visited and consoled them. I went to see her out of respect to the family, although I really didn't want to see her body. It was fine though. What I saw lying in the coffin wasn't Lala. It was her body yes, but she wasn't there. She had been there a few hours earlier when I was talking to her, but she had gone. Throughout the night the sound of the crying and howling was heart wrenching.

Yesterday it was the funeral. We went to the local Catholic church first, and then to the cemetery. Outside the church was an enterprising chap selling ice cream out of a cooler and the colmado was handing out plastic bags to women for their hair as it was spitting with rain.  At the front of the procession was a man holding a wooden cross, then the hearse, with the family walking next to it touching it, then people walking, then the motorcycles and finally the cars. It didn't rain and it was hot, so many of the women had umbrellas - I got sun burned. 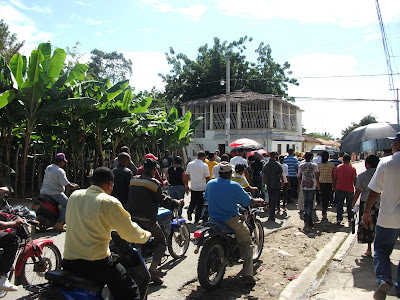 People were singing hymns and crying, and the men kept leaving the procession to have a pee behind trees. It was around three miles to the cemetery and once there, which took a couple of hours, the coffin was unloaded and carried through the higgledy piggledy graveyard to the crypt.


People were climbing on top of the different crypts to get a good view, like playing in a kids' playground - somewhat ghoulish I thought, but that is the custom I suppose. The screaming then became totally hysterical, with some of her children having to be restrained from climbing into the crypt alongside the coffin. Their grief was almost unbearable to watch and a couple of the women even screamed themselves into unconsciousness and had to be carried away.

She will be mourned now for 9 days and on the ninth day there will be the final farewell, then the furniture will go back inside, and her husband Michael, also in his eighties will start his life alone.

I will always wonder what was in that injection.