Saved by the boil


This has been a busy week so far. More visitors this weekend but they were North American and Dominican who behaved like North American. No mopping, no sweeping, no taking my clothes out and washing them. Normal lovely visitors. Not only that, they also brought me so many goodies I was totally blown away.  Cadbury chocolate, kitchenware, seeds for the garden, gardening boots and gloves, clothes for me, husband and Chivirico and even a leg of lamb which we devoured on Saturday evening.  My lovely neighbours  found me some mint so we could have mint sauce.


They left on the Sunday and then yesterday I had to drive to pick up a chap who was coming to train me in the newfangled world of online marketing, so I had arranged to go and pick him up.

I got into my jeep and realized that the seat belt would not work, as it appears that Chivirico had shoved a half chewed sweet into the bit you stick the end into. I was a tad concerned about driving without a seat belt, but hey ho, off I went.  As  I approached the military base, on the edge of town, I could see that helmet-less motorbike drivers were pulling over to the side of the road, well before the traffic lights. My heart sank as that could only mean one thing – AMET.

AMET are the traffic police. Supposedly unbribable, they are well known for their interesting hats, lack of a sense of humour and their love of issuing tickets or impounding your car. I was too late to turn round, and unfortunately there is nothing they like better than a gringa who is not wearing a seat belt. If they saw this truck, which I took a picture of the day before, then there would not be a problem, but with me there was. 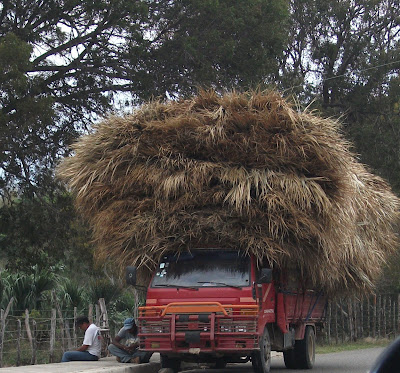 They pulled me over. I tried to think quickly. Should I suddenly not speak Spanish? Should I say the seat belt was broken? I wound down the window and tried to smile sweetly as the stern AMET chap pointed out  the glaringly obvious fact that I wasn't wearing the seat belt. And then it came to me. A master wheeze. “I can’t wear it as I am disabled,” I said. He looked confused. “I can’t wear it as I have a boil. A golondrino.”

I was telling the truth, not that you can really lie about something like that. Stepson had a boil on his face a few months back, so, rightly or wrongly, I blame him for infecting me with the particular brand of bacteria or whatever it is that causes them. His went after a couple of weeks but then a boil appeared in my left armpit. Half outside and half inside, the size of a ping pong ball. I was told to put hot water compresses on it and wait until it ‘ripened’, then it would burst and get better. I did and it did. Instant cure.

Another one then appeared a couple of weeks later in my right armpit, which disappeared on its own, only to reappear by what I can only describe as a monster boil. Think tennis ball. I am still waiting for it to ripen. I will spare you the picture of it.

Anyway, the AMET man asked me to pull over to the side of the road which I did. He then asked to see the boil. I assume he wanted proof. I had a T shirt with sleeves on, so I had to take my T shirt off, to the amusement of the crowd of onlookers who seem to enjoy watching AMET nab people. Of course they had no idea why I was taking my T shirt off.  Luckily I had my nice Victoria Secret yellow bra on, and not a holey one.


I lifted my right arm and his mouth dropped open. He then called over his AMET mate, and he disappeared into the army barracks, reappearing with what seemed like 20 squaddies. I was then instructed to show my boil to all and sundry.

There followed a long litany of advice as to how to help it to ripen it quickly. Everyone was talking at the same time, shouting to make their particular cure heard.  The cures ranged from rubbing it with a lime, to using a papaya compress, putting plantain skins in the gas flame and putting them on it, mashing up or boiling leaves of one tree or another, bikbaporoo of course (Vicks Vapour Rub), and a selection of various concoctions to drink. I was eventually allowed to get dressed, was wished all the very best, asked to report back as to which cure worked best, and sent on my way. Still without a seat belt.

Don’t you just love this country?!