What on earth is happening to me? 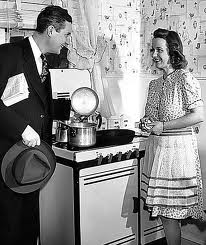 England in the 1950’s.  I was born in that decade, but only remember what family life was like from films
and soap operas.  The woman would usually stay at home; always wearing a floral apron, hair lightly permed, and spent all day cleaning and cooking. Husband would come home from work at 5pm, usually wearing a hat and always a vest.  Men all wore vests then.  She would give him his felt slippers and he would sit on the brown draylon chair with a lacy thing hung over the back. The chair would be in front of the coal fire with a brass coloured fireguard in front of it and the mantelpiece covered with china souvenirs from seaside resorts such as Blackpool and Llandudno. He would sit and watch the flickering black and white television whilst the final touches were made to his dinner. They would call each other ‘father’ and ‘mother’ and never use their real names. Then one day the son would bring his girlfriend home for tea, to meet the parents and the whole house would be cleaned in anticipation.  Great nervousness and great excitement.

I have often thought life here in the Dominican Republic had some similarities to Britain in the 1950’s but the reality hit hard last night.  A couple of days ago, stepson announced he had a girlfriend. A serious girlfriend.  She wanted to meet his parents but he was scared to bring her to meet us as he thought she wouldn’t understand my British sense of humour and I would embarrass him in front of her. As if!  I assured him I would not point out any of his annoying habits and promised to behave myself. 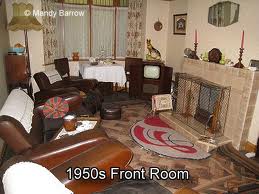 Last night, around 10pm I was working on the computer and husband was watching TV in bed, in his underpants. Stepson walked in and announced that girlfriend had arrived to meet us. Then a truly dreadful thing happened.  I changed from being me, to being that woman from the 1950’s.


I jumped up from my chair, took off my glasses, fluffed up my hair, and tried to smooth down my T-shirt.  Walked nervously into the living room and saw her standing outside the front door.
“Come in out of the cold, you must be freezing.” (This is the Dominican Republic you dork, not Yorkshire in the winter!)
She came inside, holding his hand.
“So sorry about the mess, it is the puppy, she is wrecking the place,” I apologized, wringing my hands. (I have never wrung my hands in all my life).  I looked around horrified at the chewed up empty toilet roll inserts, and bits of paper all over the place.  And then, horror of horrors spotted a little puddle of lemon coloured puppy piddle.  I managed to manoeuvre myself expertly in front of it


“And, err, do you do anything?” (What an idiotic question! My nerves were getting the better of me.)


She replied, “I am at University, studying to be a teacher.”
“Ooooh a teacher!  How amazing.” (For Pete’s sake it was a teacher not a brain surgeon. No need to overreact.) 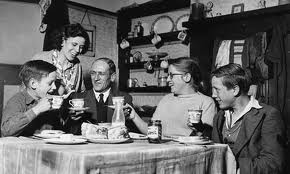 Husband appeared, fully dressed to rescue me before I made a total fool of myself.
“Hello, nice to meet you. At least my son has good taste in women!”
And I thought he was going to save the day, and instead started like that. I decided that anything I could say would be better than that.  I was sadly wrong.
“And such lovely teeth,” I gushed. (Do not even ask where that came from. I was completely mortified as the words left my mouth.  And one thing I never do is gush.) 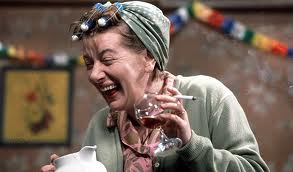 Luckily stepson could see things were not going to get any better and said that this was only the informal introduction and a formal one would follow shortly.  He ushered her out rapidly.  On asking husband later what exactly a formal introduction was, he said something to eat and a longer chat. I know that in 1950s Britain it would have been a nice pot of tea and cucumber sandwiches with the crusts off and fruit cake, but I have no idea here.  Whatever it is I will have to do it well.  This is the woman who will feed me mashed plantains when I lose my teeth and change my incontinence pads when I am old and decrepit.  I just hope I can return to being me and not continue to morph into 1950’s woman, and I have a horrid feeling I am not changing into the nice one in the floral apron at the stove, but more like Hilda Ogden from the famous British soap opera, Coronation Street.